Message from the Pope for Attack
406 people have been hospitalized in Las Vegas after the attack. 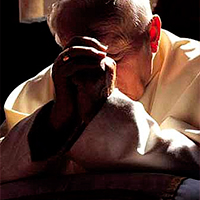 On Monday Pope Francis offered his condolences and spiritual support to victims of a deadly shooting in Las Vegas that left at least 50 people dead and 200 more wounded when a gunman opened fire at a country music festival.

“Deeply saddened to learn of the shooting in Las Vegas, Pope Francis sends the assurance of his spiritual closeness to all those affected by this senseless tragedy,” read an Oct. 2 telegram signed by Vatican Secretary of State Cardinal Pietro Parolin.

Addressed to Las Vegas Bishop Joseph Anthony Pepe, the telegram offered the Pope's encouragement for the efforts of police and emergency service personnel. Francis also assured of his prayers “for the injured and for all who have died, entrusting them to the merciful love of Almighty God.”

In what has become deadliest the mass shooting in U.S. history, at least 50 people died and 200 were wounded when a shooter opened fire on the last of a the three-day Route 91 Harvest festival in Las Vegas, Nev. just after 10p.m. Sunday night, BBC News reports.

According to the Las Vegas Police department, an estimated 406 people have been hospitalized after the incident.

The death toll, which police say is only preliminary, tops last year's massacre at a nightclub in Orlando, which left 49 dead. It was also reminiscent of a deadly shooting in Paris in November 2015 that killed 89 people as part of a coordinated attack by the Islamic State that left a total of 130 people dead.

The festival, which took place along the Las Vegas Strip, was sold out, and had drawn thousands of participants to see top performers such as Eric Church, Sam Hunt and Jason Aldean.

Identified as Stephen Paddock, 64, the shooter opened fire from the 32nd floor of the Mandalay Bay Hotel, raining bullets on the open-air music festival happening below. Although the local sheriff department has not given an exact number of casualties, two of the at least 50 killed were off-duty officers.

The Associated Press reports that Paddock shot and killed himself as police tried to enter his room. Officers believe he acted alone, but are unsure of his motive. They are also currently pursuing a female Asian companion, reported to be Paddock's roommate, as a “person of interest” in the incident.

In a tweet sent this morning, U.S. President Donald Trump offered his “warmest condolences and sympathies” to victims and families affected by “the terrible Las Vegas shooting.”

Various other global leaders have also voiced support and condolences, including representatives from the UK, Australia and Sweden.

In separate tweets, Cardinal Sean O'Malley of Boston also offered his support to victims, their families and emergency workers, asking that “God grant strength and faith to families affected by last nights violence; Lord welcome the dead into your loving embrace.”