Vatican
Solemn Commitments, are not enought
Archbishop Paul R. Gallagher was present in the plenary session of the High Level Meeting. 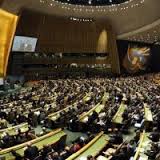 Citing Pope Francis, Archbishop Paul R. Gallagher said that the UN plan to address human trafficking is making progress, but that “solemn commitments,” although necessary, “are not enough.”

Archbishop Gallagher, Head of the Holy See Delegation at the 72nd session of the United Nations General Assembly and Secretary for Relations with States, made his comments during the plenary session of the High Level Meeting on human trafficking, September 27, 2017 at the UN in New York City.

“Since the adoption, in 2010, of the United Nations Global Plan of Action to Combat Trafficking in Persons, the extent of the crime of human trafficking across the globe has worsened.” The archbishop said, but noted that “during the same period, the recognition of the dimensions of the problem, the resources required to respond to it, and the resolve of governments, institutions and individuals to combat it have grown.”

Archbishop Gallagher said that progress has been made in identifying the factors that contribute to human trafficking, but that armed conflicts around the world have fed the problem.  He offered two presentations, which are included below as provided by the Holy See:

Intervention by H.E. Msgr. Paul R. Gallagher on the Global Plan of Action to Combat Trafficking in Persons (September 27)

S3ince the adoption, in 2010, of the United Nations Global Plan of Action to Combat Trafficking in Persons in 2010, the extent of the crime of human trafficking across the globe has worsened. Thankfully, however, during the same period, the recognition of the dimensions of the problem, the resources required to respond to it, and the resolve of governments, institutions and individuals to combat it have grown. It is, alas, a meagre consolation, because the gap is still growing between our commitments and efforts and the reality confronting victims including the serious dangers that persons in vulnerable situations face every day. Finding effective measures to close this gap is the reason we are gathered here.

One of the most conspicuous and promising signs of the growing resolve to fight trafficking in persons is that three of the 169 targets in the 2030 Agenda for Sustainable Development are explicitly dedicated to fighting different dimensions of this modern “crime against humanity.”[1] However, as Pope Francis noted minutes before the adoption of the 2030 Agenda, in his address to the General Assembly: “Solemn commitments,” although necessary, “are not enough.” Our commitments to fight this heinous crime must translate into action and puts an end, as quickly as possible, to plagues like “human trafficking, the marketing of human organs and tissues, the sexual exploitation of boys and girls, slave labor, including prostitution,” and other evils. We must ensure, Pope Francis underlined, that our efforts are “truly effective in the struggle against all of these scourges.”[2] The current appraisal of the Global Plan of Action provides us an opportunity to assess that effectiveness.

My Delegation would like to structure its assessment on the progress of the Plan of Action around the four objectives that underpin it, often referred to as the “four Ps”: to prevent trafficking in persons by addressing what drives it; to protect and assist victims; to prosecute those involved in the crime of trafficking; and to promote partnerships among governmental institutions and all the stakeholders to eradicate trafficking and rehabilitate survivors.

There has been significant progress in identifying and addressing many of the social, economic, cultural, political and other factors that make people vulnerable to human trafficking, in formulating comprehensive policies and programs, and in developing educational and awareness-raising campaigns. At the same time, however, several of the drivers of vulnerability have worsened, in particular armed conflicts that provoke enormous humanitarian emergencies and forced migration, and the refugee crisis, both of which have exacerbated the dramatic situation faced by people, especially women and children. On the part of each country, the utmost honesty is essential in examining what domestic factors of demand fuel this growing global industry. With regard to cultural factors, the Political Declaration commits the international community to intensify efforts to “prevent and address, with a view to eliminating, the demand that fosters trafficking, especially of women and girls, for all forms of exploitation.”[3] To do so in a resolute way requires a frank and courageous examination of those practices, such as pornography and prostitution that foster sexually addictive behavior and the dehumanization of other persons as mere objects of gratification.

Concerning the protection and assistance of victims, my Delegation believes that there is now greater awareness and legal recognition that the victims of trafficking are indeed victims rather than “silent partners” or, even worse, perpetrators of crime. More services are in place to identify and liberate victims from the clutches of modern slavery, regularize their situation and put them on the path to recovery. Because of the deep traumas suffered, however, there is need for greater recognition that the work of rehabilitation cannot be a brief program but requires a long-term investment to provide the healing and training necessary for the victims to begin a normal, productive and autonomous life.

With regard to the prosecution of crimes of trafficking in persons, there have been various advances in terms of formulating adequate legal instruments to investigate, prosecute and punish traffickers, unlocking the financial chains, understanding the connection to other forms of organized crime and corruption, and fostering cooperation at and across borders. At the same time, however, as the 2016 Global Report on Trafficking in Persons makes clear, there are still very few convictions and too much impunity. [4]

There has also been progress in the formation of partnerships to strengthen collective action among governments and governmental agencies, academic institutions and the media, civil society and the private sector. The Political Declaration specifically mentions partnerships with and among faith-based organizations. [5] Just to mention an example, the Santa Marta Group, named after the residence of Pope Francis, is an international alliance of police chiefs and bishops working together, at all levels, to promote coordination between law enforcement and faith-based organizations in combating human trafficking according to the specific competencies of each one. Similarly, the many groups and networks of Catholic religious sisters, coordinated internationally by Talitha Kum, a network of 22 member organizations in 70 countries, show how faith-groups can collaborate with law enforcement authorities and with one another, joining more powerful coalitions with multi-pronged strategies in the fight against trafficking in persons and other contemporary forms of modern slavery.

In his 2015 Message for the World Day of Prayer for Peace, dedicated to the theme of eliminating human trafficking, Pope Francis emphasized this need for partnerships and for a new worldwide solidarity and fraternity to remedy the indifference and exploitation that forms a polluted human ecology, in which human trafficking thrives. “We are facing a global phenomenon that exceeds the competence of any one community or country,” he wrote. “In order to eliminate it, we need a mobilization comparable in size to that of the phenomenon itself.”[6] The Global Plan of Action is an important part of that mobilization and this appraisal a means to help make the Global Plan increasingly effective. Our efforts must be commensurate to the challenge.