Vatican
Silence
When Christianity is attacked, we only do a deep silence. 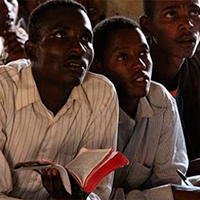 It has been more than three years since 276 school girls and boys were kidnapped by Boko Haram in Nigeria. While many of them have been released, a case study has recently been conducted and published proving one of the underlying problems with terror against Christian women and children: silence.

JANE ADOLPHE
Author, Persecution and Genocide of Christians in the Middle East
“My purpose behind the book was that there was a silence, almost internationally, a consensus on the silence of any harm being done to Christians. I think we're all about being careful that we're not shouting hate speech against any group. However, not to recognize and not to use the word 'Christian' is a problem internationally.”

By studying the Boko Haram case, Jane uncovered a certain silence that she says is present in many parts of the world. To break this silence, Jane published her findings in this book, “Genocide of Christians in the Middle East.” Along with 12 other contributors, the book tackles the many components of persecution from International Humanitarian Law to the Holy See’s Diplomatic Response to the problem.

JANE ADOLPHE
Author, Persecution and Genocide of Christians in the Middle East
“I think what's happening in our society is that there is an underlying assumption that it's okay to hate Christians. They are being raped, they are being put into these slavery centers, sold off the Internet, etc. and we know that. So why aren't we mentioning that?”

Jane says that in order to combat future and ongoing harm being done to Christian women and children, this stigma of silence needs to be broken so these school children can return home and others can be protected.