Family
Kids and Social Media
Kids spend most of the time posting photos. 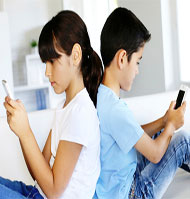 It’s time to get real — we can’t all be stunningly beautiful, handsome, successful, and ebullient all of the time

A dad in New York City recently mentioned that his daughter came up to him, insisting that he “like” her latest Instagram post on her feed. He later found out she had also begged her siblings and her mom to “like” her photo as well.

Apparently, one of the girls in her class was getting more likes and she was trying to keep up.

In a piece in Time magazine last August, author and educator Rachel Simmons noted, “Visual platforms like Facebook, Instagram and Snapchat deliver the tools that allow teens to earn approval for their appearance and compare themselves to others. The most vulnerable users, researchers say, are the ones who spend most of their time posting, commenting on and comparing themselves to photos. One study found that female college students who did this on Facebook were more likely to link their self-worth to their looks.”

She continued: “Interestingly, while girls report more body image disturbance and disordered eating than boys — studies have shown both can be equally damaged by social media.”

It is understandable why people would want to post the best version of themselves online. But it can also become somewhat of an obsession, trying to create an image of yourself that is simply no longer you: always happy, always beautiful, always successful, always enjoying incredibly beautiful locations … really?

Fr. Raniero Cantalemessa is a theologian and an Italian Catholic priest in the Order of Friars Minor Capuchin — he has served as the preacher to the papal household since 1980, under Pope John Paul II, Pope Benedict XVI and Pope Francis. He has observed: “We have two lives (wrote Blaise Pascal): One is our true life, and the other is the one that exists in our minds or in the minds of others. We work tirelessly to adorn and preserve our imaginary existence and neglect the real one. If we possess a certain virtue or merit, we are eager to have people know it any way we can and to have that virtue or merit ascribed to our imaginary existence. We diminish our true life in order to add something to our imaginary life…”

Most people really do want to know the real you: the “you” with your weaknesses and vulnerabilities, with your quirks and imperfections, with your particular nuances that set you apart from everyone else.

God made everyone beautiful, with very particular and very unique gifts and talents. Try to develop those gifts in “real life” and don’t worry if others are noticing or appreciating them.

A young man who was a star athlete and scholar in high school, went to Boston College and who is now an officer in the U.S. Army told me during his college days, “Fr. Michael, the best advice that I could give any high schooler is not to worry about what other people think. Focus on what God wants from you, follow your conscience — and you will be at peace.”

I think that is sound advice for anyone to follow.

This article is  from: