Daily Gospel
Liturgical Cycle A
The Heart of the Matter
Luke 6: 1-5 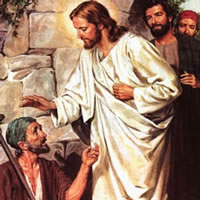 While Jesus was going through a field of grain on a sabbath, his disciples were picking the heads of grain, rubbing them in their hands, and eating them. Some Pharisees said, "Why are you doing what is unlawful on the sabbath?" Jesus said to them in reply, "Have you not read what David did when he and those who were with him were hungry? How he went into the house of God, took the bread of offering, which only the priests could lawfully eat, ate of it, and shared it with his companions." Then he said to them, "The Son of Man is lord of the sabbath."

Introductory Prayer: Lord, I worship you because I came from you. I long for you because you made me for yourself. I praise you as my ever-present helper. I call on you as my powerful protector. (Universal Prayer of Pope Clement XI )

1. The Pharisees’ Heart: Sometimes a short phrase reveals so much about what is happening inside a person’s mind and heart. One can get a glimpse into Hitler’s corrupt heart with his famous phrase: “I do not see why man should not be just as cruel as nature.” His actions were of the cruelest. Thirty years ago, when Saint John Paul II was elected pope, the simple phrase, “Be not afraid”, indicated the attitude he would have for the following 26 fearless years of his papacy. In this passage the Pharisees say so much about the state of their own hearts by saying so little: “Why are you doing what is unlawful on the Sabbath?” The Pharisees are all caught up in the externals of the law and miss the big picture that Christ came to bring: complete love for God and heroic love of neighbor. As Christians we are not called to have a heart that calculates the cost, but rather one filled with unconditional love.

2. A King’s Heart: Another character in this passage is King David, whom Christ hails for having chosen to feed his starving army over scrupulously following some norms of the law regarding eating. From the story of David and Goliath, we learn that David had a brave heart from his youth and that he trusted in God over his own limitations. Young David’s heart was honest and humble: King Saul was trying to kill him, yet when David had the chance to kill Saul in a cave, he relented and later made amends with Saul. David’s heart was weak when he fell in love with Uriah’s wife and then had Uriah killed. Nevertheless, David’s heart did not grow cold from this sin; rather, he repented deeply: “Have mercy on me, God in your goodness blot out my offenses, wash away all my guilt, from my sin cleanse me” (Psalm 51). With time and patience David formed a remarkable heart that loved God and neighbor.

3. The Sacred Heart: What love the Heart of Christ shows his apostles in this passage. Imagine the scene: Christ walking through a ripe field of grain with his closest friends, laughing, joking, talking about the town they just visited, speaking of their dreams, and also snacking on the ripe harvest. Christ’s heart was so immersed with love for these men who would be the pillars of the Church and who would bring his message to the whole world. How far his thoughts were from the littleness and pettiness of the empty prescriptions of the pharisaical law! His law is the new law of love: “Behold the heart that has so loved men.” Christ looks at us the same way he looked at his apostles in the field – as friends who are called to be the pillars of the new evangelization, as apostles who are to bring his words to the end of the earth. He needs us to say “yes” to this call!

Conversation with Christ: Lord Jesus, thank you for the unconditional love of your heart. I want to repay your love for me by loving you back with the same intensity. I know I always fall short of this, but you know my heart, and you know I want to be close to you until the day I meet you face-to-face in eternity.

Resolution: With a repentant heart, I will go to confession today.