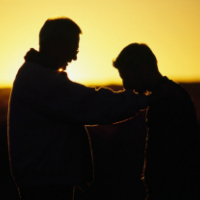 Then Peter came and said to Jesus, "Lord, if another member of the church sins against me, how often should I forgive? As many as seven times?" Jesus said to him, "Not seven times, but, I tell you, seventy-seven times. “For this reason, the kingdom of heaven may be compared to a king who wished to settle accounts with his slaves. When he began the reckoning, one who owed him ten thousand talents was brought to him; and, as he could not pay, his lord ordered him to be sold, together with his wife and children and all his possessions, and payment to be made. So the slave fell on his knees before him, saying, 'Have patience with me, and I will pay you everything.' And out of pity for him, the lord of that slave released him and forgave him the debt. But that same slave, as he went out, came upon one of his fellow slaves who owed him a hundred denarii; and seizing him by the throat, he said, 'Pay what you owe.' Then his fellow slave fell down and pleaded with him, 'Have patience with me, and I will pay you.' But he refused; then he went and threw him into prison until he would pay the debt. When his fellow slaves saw what had happened, they were greatly distressed, and they went and reported to their lord all that had taken place. Then his lord summoned him and said to him, 'You wicked slave! I forgave you all that debt because you pleaded with me. Should you not have had mercy on your fellow slave, as I had mercy on you?' And in anger his lord handed him over to be tortured until he would pay his entire debt. So my heavenly Father will also do to every one of you, if you do not forgive your brother or sister from your heart."

Introductory Prayer: Lord Jesus, I believe that you came into this world in order to redeem sinners. I hope in you, and in your power to transform my soul, by your grace, from sinfulness to holiness. Lord, I love you and offer you the longings of my heart to truly put you truly first in my life. I want to love you with all my mind, heart, soul and strength.

Petition: Lord Jesus Christ, help me to forgive my brothers and sisters from the heart.

1. Seventy-seven Times:  Jesus surprises Peter with this symbolic response. He surprises us, too, with the depth of his mercy. We, as Peter, think ourselves generous when we forgive our neighbors generously — seven times. But Jesus forgives in an unlimited manner — “seventy-seven” times –– and teaches us to do the same. This parable teaches us about God’s unlimited mercy for each one of us. He calls us to imitate him in this characteristically Christian virtue.

2. Have Patience with Me:  The slave who owes the master ten thousand talents represents each one of us before God. We owe everything to God and without his help we are totally unable to make up for our sins. Yet God in his mercy has chosen to forgive us. In receiving God’s patient love, our lives have been changed. We have new life because of Jesus Christ!

3. You Wicked Slave:  Despite the great love we have received, sometimes we can be unforgiving toward our neighbors, just like the slave whose debt was pardoned. The forgiven slave becomes a wicked slave the moment he does not “forgive as he has been forgiven.” How easy it is to forget God’s love when we feel the pressure to “produce”! We become like that wicked slave, forgetting God and demanding a purely human justice from those around us — family, friends and business associates.

Conversation with Christ: Lord Jesus, your lesson of forgiveness is very clear in this parable. You desire followers who imitate you, who will “love one another as you have loved them.” Teach me this humility and gratitude that will lead me to patiently pardon all of those around me.

Resolution: Lord, today I promise to forgive at least one person who has offended me.