Learn to pray
Spirituality
Rules, Reform, and the Secret to a Joyful Christian Life
Real joy in Christian life begins when we stop trying to be good and start loving God. 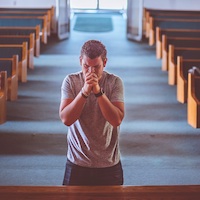 One of the steamiest stories in the Old Testament is the tale of David’s adultery with Bathsheba in 2 Samuel 11. A while back as I studied Samuel, I remember wondering how on earth a guy who so thoroughly blew it could possibly be the “one after God’s own heart” (1 Sam 13:14). How is it possible we venerate the memory of a man who committed murder and adultery? We still pray his prayers in the Psalms!

In a northern, Anglo-Saxon culture, following the rules is paramount. America’s Puritan roots are evident in the psyche of her people, from discipline and hard work to hailing economic prosperity as an indicator of heavenly blessings to ostracizing those who trespass on the approved mores. Oddly enough, while the moral fabric of our society is so worn it is see-through, we still condemn scandal in public figures’ lives as an unforgivable offense. The stigma of the scarlet letter still applies. David would never have made it today.

The inverse of scandal is seeking security in rules. We like rules because they make the game possible and give security. They tell us how to succeed, how to win. In the game of religion, the rules tell me how I need to behave to be good with God. Many of us live our relationship with the Lord as if it were a sort of system. Even if we don’t articulate it, our thoughts may go a little like this, “If I follow the rules, I will be blessed and happy. Or at least I will feel better about myself because I am good with God. If I don’t follow the rules, I am not good with God and that spells negative consequences for my quality of life.” The underlying premises of religious morality are, “Follow the rules, be good, and you will be happy.”

As a product of Puritan, North American culture and a religious following a rule of life (for a religious congregation like the Legionaries, the rule of life is called the constitution or constitutions), I have spent a lot of time reflecting on the role of the rule. I have come to realize in the past seven years of the renewal of my congregation together with the long process of revising our constitutions, that it really isn’t about the rules at all! David understood that. That’s not to say his sin was not grave, but his prayer of repentance, Psalm 51, sheds light on how this great sinner also happened to be the one who captivated God’s own heart.

Despite destroying a marriage and ordering the assassination of a friend, David has the gall to ask God for forgiveness. He begs the Lord to “create a new heart” in him and promises to teach sinners the way to repentance. “Restore my joy in your salvation.” His prayer even ends with a note of hope! You see, David understood that all this religion business is not about being good with God. In fact it is not about being good at all! It is all about loving God.

David knew the LORD and rejoiced in the love showered upon him (Ps. 34). He rejoiced in God’s mighty deeds and in the beauty of God’s creation (Ps. 65). He revelled in the presence of the Holy One, dancing before the Ark of the Covenant (2 Sam 6:14). He was not concerned about being good. He was in love with God! And even when he had fallen to rock bottom in his own filth, he still remembered his love for God and came back to ask forgiveness for his own sake, yes, but perhaps even more because he had offended the Lord: “Against you, you only, have I sinned” (Ps 51:4).

This shift of focus from following rules to loving God is so subtle it is easy to miss. But it is ground-shattering in Christian life. Renewal, conversion, holiness is not about being good. It is about loving God!

So do we throw out the rules? Of course not! They are guidelines that tell us an awful lot about what God likes. But they become an idol when we seek our security in them and not in a living relationship with the living God. Real joy in Christian life begins when we stop trying to be good and start loving God.