Daily Gospel
Liturgical Cycle A
If It Doesn’t Kill You, It Will Make You Stronger
John 9: 1-41, Fourth Sunday of Lent. Cycle A 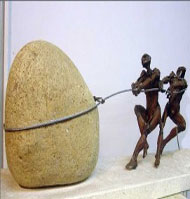 As he walked along, he saw a man blind from birth. His disciples asked him, "Rabbi, who sinned, this man or his parents, that he was born blind?" Jesus answered, "Neither this man nor his parents sinned; he was born blind so that God's works might be revealed in him. We must work the works of him who sent me while it is day; night is coming when no one can work. As long as I am in the world, I am the light of the world." When he had said this, he spat on the ground and made mud with the saliva and spread the mud on the man's eyes, saying to him, "Go, wash in the pool of Siloam" (which means Sent). Then he went and washed and came back able to see. The neighbors and those who had seen him before as a beggar began to ask, "Is this not the man who used to sit and beg?" Some were saying, "It is he." Others were saying, "No, but it is someone like him." He kept saying, "I am the man." But they kept asking him, "Then how were your eyes opened?" He answered, "The man called Jesus made mud, spread it on my eyes, and said to me, 'Go to Siloam and wash.' Then I went and washed and received my sight." They said to him, "Where is he?" He said, "I do not know." They brought to the Pharisees the man who had formerly been blind. Now it was a sabbath day when Jesus made the mud and opened his eyes. Then the Pharisees also began to ask him how he had received his sight. He said to them, "He put mud on my eyes. Then I washed, and now I see." Some of the Pharisees said, "This man is not from God, for he does not observe the Sabbath." But others said, "How can a man who is a sinner perform such signs?" And they were divided. So they said again to the blind man, "What do you say about him? It was your eyes he opened." He said, "He is a prophet." The Jews did not believe that he had been blind and had received his sight until they called the parents of the man who had received his sight and asked them, "Is this your son, who you say was born blind? How then does he now see?" His parents answered, "We know that this is our son, and that he was born blind; but we do not know how it is that now he sees, nor do we know who opened his eyes. Ask him; he is of age. He will speak for himself." His parents said this because they were afraid of the Jews; for the Jews had already agreed that anyone who confessed Jesus to be the Messiah would be put out of the synagogue. Therefore his parents said, "He is of age; ask him." So for the second time they called the man who had been blind, and they said to him, "Give glory to God! We know that this man is a sinner." He answered, "I do not know whether he is a sinner. One thing I do know, that though I was blind, now I see." They said to him, "What did he do to you? How did he open your eyes?" He answered them, "I have told you already, and you would not listen. Why do you want to hear it again? Do you also want to become his disciples?" Then they reviled him, saying, "You are his disciple, but we are disciples of Moses. We know that God has spoken to Moses, but as for this man, we do not know where he comes from." The man answered, "Here is an astonishing thing! You do not know where he comes from, and yet he opened my eyes. We know that God does not listen to sinners, but he does listen to one who worships him and obeys his will. Never since the world began has it been heard that anyone opened the eyes of a person born blind. If this man were not from God, he could do nothing." They answered him, "You were born entirely in sins, and are you trying to teach us?" And they drove him out. Jesus heard that they had driven him out, and when he found him, he said, "Do you believe in the Son of Man?" He answered, "And who is he, sir? Tell me, so that I may believe in him." Jesus said to him, "You have seen him, and the one speaking with you is he." He said, "Lord, I believe." And he worshiped him. Jesus said, "I came into this world for judgment so that those who do not see may see, and those who do see may become blind." Some of the Pharisees near him heard this and said to him, "Surely we are not blind, are we?" Jesus said to them, "If you were blind, you would not have sin. But now that you say, 'We see,' your sin remains.

Introductory Prayer: Father, I come to you like the man born blind. I am totally dependent on your grace. I want to show you my love by being totally open to the graces you will give me through this meditation.

Petition: Lord, help my faith grow when I encounter adversity.

1. Who’s to Blame? Many people, moved by compassion, would drop a coin into the cup, thinking all the while, “Poor devil, must have been quite a sinner.” The disciples, though they had heard Jesus’ many parables about mercy, show a tiny bit of this “misfortune-equals-divine-punishment” outlook themselves. But, perhaps it could have been his parents who are to blame? The disciples are frequently criticized for being slow on the uptake, but that is because they are the mirror that deflects the criticism from where it should really go: to ourselves. How often, when bad things happen, we wonder if God really loves us. We can find ourselves shaking our fist and muttering, “He doesn’t care what happens to me.” Jesus’ answer to this lack of faith is as sharp as it is consoling: “Neither this man nor his parents sinned; he was born blind so that God's works might be revealed in him.”

2. Faith Can Grow through Adversity! The simple life of the formerly blind beggar became quite complicated indeed. Instead of encountering rejoicing friends and family upon receiving the miracle, he encounters confrontation. The adversity is intense; the hostility of the Pharisees is palpable. Yet through it all, the man remains steadfast in his belief in Jesus. In fact, with each attack at his credibility and even with his parents wanting to keep a safe distance, the man’s adherence to Jesus grows and grows. This is seen in the way he refers to Jesus. “The man Jesus” … “He is a Prophet” … “I do believe, LORD.” From “man” to “prophet” to “Lord”: That is the work of God shining through this unlikely apostle! Let’s look at the situations in our life that challenge our faith. Could we, like this man, turn the tables and make it a faith-growing opportunity? Like him, could we be better witnesses to Jesus?

3. He Worshiped Him: Faith not only grows through adversity. It can sometimes make a giant leap. Nowhere else in the New Testament, before the Resurrection, do we encounter Jesus being “worshiped.” The man once blind now is gifted with dazzling light: Jesus is Lord, Jesus is God! That gift is so great, so amazing, that there is no looking back. The man has been tossed out of the synagogue which, according to the Jewish culture of the time, was the moral equivalent of a death sentence; cut off from the people, he was a non-person. Yet there are no regrets. The vision of spiritual truth, the astounding realization of who Jesus is, more than repays any sacrifice.

Conversation with Christ: Lord Jesus, I long to please you with my life. Help me to recognize when you are trying to do God’s works through me. Often I am slow to see any positive value to passing adversity. But I know with your help I can be a witness to you. Like the man you cured of his blindness, I cry out to you, “I do believe, Lord!”

Resolution: Each time I encounter adversity, I will make an act of faith stronger than the last one.