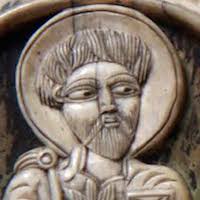 Following a wild and mis-spent youth, Vitalis had a conversion and sought to do penance first by going on pilgrimage to the most important shrines throughout Europe, and then by becoming a Benedictine monk at Monte Subasio in Umbria, Italy. Late in life he left community life to live as a barefoot hermit near Assisi, Italy; his only possession was a basket he used to fetch water. Known throughout the region for his piety and healing miracles, especially involving the urinary tract.