Catechists
Permanent catechesis
Purgatory
What happens after we die? Is purgatory real? 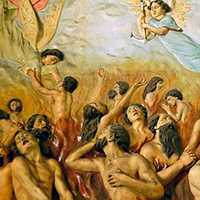 Concerning the scriptural basis for Purgatory, Matthew 12:32 tells us about sin against the Holy Spirit and the fact that this sin will not be forgiven in this world or in the world to come; implying that other sins will be forgiven in the world to come. Revelation 21:27 tells us that nothing impure will enter into Heaven; but a soul bearing any sin at all is not pure. Hebrews 12:29 and Deuteronomy 4:24 remind us that God is a consuming fire [his love is a fiery love (the highest rank of angels, the ones closest to God's fiery love, is called Seraphim which is Hebrew for "the burning ones")].

How does the impure become pure? Through the fire of judgment; the refining fire of God's love.

This refining process is described in 1 Corinthians 3:10-15 wherein the wood, hay and stubble (impure works, stains upon the soul) are burned away and only the gold, silver and precious stones (works of merit) remain and after suffering this loss, man is saved. There is no detailed explanation of Purgatory in Holy Scripture because it was not a point of contention. Research into Jewish tradition/beliefs at the time of Jesus shows that sheol was divided into more than the two parts most commonly considered today (Hell and Paradise) and in fact the Hell of the eternally damned is not called "sheol" but "gehenna" in the Bible. The Hebrew word "sheol" is translated as "hades" in Greek and "purgatorio" in Latin. Josephus, a first century Jewish historian, gives a very excellent description of sheol/purgatory in his writing Discourse to the Greeks Concerning Hades. This writing describes exactly the understanding of the Pharisees about life after death, an understanding which Jesus supported against the Sadducees (Luke 20:27-40).

The existence of purgatory, rather than questioning the efficacy of Christ's sacrifice, as is claimed by some, makes Christ's sacrifice meaningful because souls are no longer trapped there forever as is illustrated in Matthew 27:50-51 wherein when Jesus died on the cross the curtain (or veil) was torn in two from top to bottom, Heaven was opened and available to all who would approach through Jesus, the new High Priest. If you continue reading through verse 52, you will find that those who gained this access were many of the dead saints; not necessarily all who were trapped there. We also know that between the time of His death and before His resurrection Jesus descended to hades, preached to the souls trapped there, and lead many of them to Heaven (how many, we don't know). The final day of atonement (at-one-ment, being made one with God) had come for these souls but they had remained in paradise for some period of time after the veil was torn before gaining Heaven. The repentant thief went there and not straight to Heaven ["You will be with me today in Paradise" (Luke 23:43)]; how long he remained there is unknown.