Catechists
Permanent catechesis
The Intercession of Saints
This text helps explain how saints help reach our prayers to God. 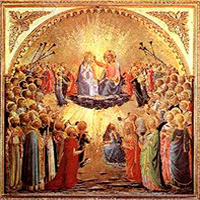 Before exploring the topic of Jesus' unique mediation, it will be helpful to define the term. The word mediator generally has two meanings. In the strict, primary sense, it refers to the principal who intervenes between opposed parties in order to reconcile them. There are four components to this definition: 1) a personal intervention, 2) of a principle, 3) for the purpose of effecting a reconciliation, and 4) between two or more alienated parties.

Regarding our redemption the only person who fits this strict definition is Jesus Christ. Jesus alone effectively interposes between the estranged parties, God and the entire human race. Only Jesus was capable of achieving a reconciliation with God. As St. Paul writes: "For there is one God, and there is one mediator between God and men, the man Christ Jesus" (1 Tim 2:5). This is the belief of most Christians. It has always been the teaching of the Roman Catholic Church.

There is, however, a less strict sense that Christians have always understood the idea of mediation. This is the idea of a subordinate mediation by which we participate in the mediation of Jesus Christ. It is a mediation that is effective through, with, and in Christ. The subordinate mediator never stands alone, but is always dependent on Jesus. Let's examine the biblical foundation for this understanding, with a special reference to 1 Tim 2:5.

In interpreting a passage of Sacred Scripture certain principles must apply. For example, the Bible has one divine author but different human authors. Therefore the individual books of the Bible form one harmonious whole, each part agreeing with what came before and what followed. Thus, for example, a teaching in Genesis will not be contradicted in John's Gospel, or vice versa. In addition, the complete body of truth revealed in the whole Bible frequently sheds light on understanding a specific Book or a specific text. In this way subsequent books expand our knowledge and understanding of Genesis. Secondly, in attempting to interpret a particular passage it to begin by considering the passage in its context. Let's turn to Paul's first letter to Timothy 2:5 and see how these principles apply.

If we consider the verse in question: "For there is one God, and there is one mediator between God and men, the man Christ Jesus," apart from its context it is easy to misinterpret the passage. Doesn't "one mediator" mean just that, one - no exception? Therefore asking for the intercession of saints seems anti-biblical from this perspective. However, that interpretation is inaccurate. The passage is not isolated, but a verse in a larger book called an epistle. What, then, is the correct meaning of Paul's teaching? How does this passage fit in with the whole picture presented in the Bible? Let's consider these questions by first examining the immediate context of 1 Timothy 2:5.

As a practical matter the vast majority of Christians pray for one another. They often establish prayer groups just for that purpose. What, then, is the objection to asking the Christians in heaven, the saints, to pray for us on earth? Many people have benefited from the fervent and persistent prayers of a loving parent or grandparent. Once that person is in heaven are we to suppose that they no longer care about our welfare, or that God would be offended if we asked them to intercede for us? This idea certainly does not find a basis in 1 Timothy 2:5. Undoubtedly, the rejection of praying to saints is founded on the desire to emphasize the sublime and infinite capability of Jesus' unique mediation. This commendable motivation leads, unfortunately, to an inadequate understanding of the awesome power of Christ's mediation. In other words, it conflicts with important biblical lessons.

One significant theme that runs through the books of the Bible is the idea of Covenant. The Covenant is God's faithful oath by which he makes us his people, his family. Surely, the Bible's many examples of the imperfect men through whom God worked mighty deeds reflect his power not detracts from it. The Bible amply demonstrates that the loving Father chooses to engage his weak and sinful children in the family business - the salvation of souls. Thus, Paul, following his plea for "supplications," "prayers," and "intercessions" (1 Tim 2: 1-2), instructs Timothy that this mediation is pleasing to God. "This is good, and it is acceptable in the sight of God our Savior, who desires all men to be saved and to come to the knowledge of the truth" (1 Tim 3:4).

In the Old Testament we are presented with the example of Abraham's mediation for the people of Sodom, to which God both approved and responded. Regarding the story of Joseph, John Skinner writes, "The profoundly religious conviction which recognizes the hand of God, not merely in miraculous interventions, but in the working out of divine ends though human agency and what we call secondary causes, is characteristic of the Joseph narrative."1 Moses, David, the prophets, and the Levitical priesthood all clearly performed roles of mediation. In the New Testament Jesus formed the Apostles and assigned them roles of mediation. He instructed them to evangelize and baptize (Mt 28:18-20), to forgive sins (Jn 20:23), and to celebrate the Eucharist (1 Cor 11:23-25) - all functions of mediation. Paul concluded his teaching in first Timothy by connecting Jesus' mediation to his own apostolate, which is also a role of subordinate mediation. "For this I was appointed a preacher and apostle (I am telling the truth, I am not lying), a teacher of the Gentiles in faith and truth" (1 Tim 2:7).

The truth of Christians participating in the one mediation of Jesus Christ is abundantly clear in the practice of the early Church. This is affirmed by the highly, respected Protestant patrologist J.N.D. Kelly. "A PHENOMENON of great significance in the patristic period was the rise and gradual development of veneration for the saints, more particularly for the Blessed Virgin Mary. . . Earliest in the field was the cult of martyrs, the heroes of the faith whom Christians held to be already in God's presence and glorious in His sight. At first it took the form of the reverent preservation of their relics and the annual celebration of their 'birthday'. From this it was a short step, since they were now with Christ in glory, to seeking their help and prayers, and in the third century evidence for the belief in their intercessory power accumulates."2

A touching example is expressed in the ancient account of the martyrdom of St. Polycarp who was 86 years old at the time of his death. "When [Polycarp] finally had finished his prayer, in which he remembered everyone with whom he had ever been acquainted, the small and the great, the reknowned and the unknown, and the whole Catholic Church throughout the world, and the moment of departure had arrived, they seated him on an ass and let him into the city."3 After his martyrdom we learn of the reverence that was paid to his remains. "Then, at last, we took up his bones, more precious than costly gems and finer than gold, and put them in a suitable place. The Lord will permit us, when we are able to assemble there in joy and gladness; and to celebrate the birthday of his martyrdom."4

St. Cyril of Jerusalem in his Catechetical Lectures, which were composed around the year 350, wrote the following. "Then we make mention also of those who have already fallen asleep; first, the patriarchs, prophets, Apostles, and martyrs, that through their prayers and supplication God would receive our petition."5

St. Augustine preached twice weekly from the time of his ordination in 391 until his death in 430. He had this to say on our subject. "Prayer, however, is offered for other dead who are remembered. For it is wrong to pray for a martyr, to whose prayers we ought ourselves be commended."6 In his work, Against Faustus, written around the year 400, he writes: "A Christian people celebrates together in religious solemnity the memorials of the martyrs, both to encourage their being imitated and so that it can share in their merits and be aided by their prayers."7

The effectiveness of a Christian's subordinate mediation rests solely on the one mediator, Jesus Christ. "I am the vine, you are the branches. He who abides in me, and I in him, he it is that bears much fruit, for apart from me you can do nothing. . . If you abide in me, and my words abide in you, ask whatever you will, and it shall be done for you" (Jn 15: 5, 7. Christians are formed into an extraordinary solidarity with one another in this oneness with Christ.8 This relationship provides the potency that makes our intercession for one another effective, whether we are on earth or in heaven.