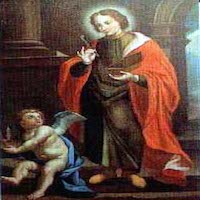 Born to the French nobility. Raised in a pious family; he was a Franciscan tertiary at age 5. Lived as a hermit in a cave with his brother from age 18 to 20. They became somewhat famous as holy men, which they took as a sign that they should become pilgrims in order to escape their visitors and the temptations that came with them. Gerard died on the way to Jerusalem. Miracles and healings have been reported at his tomb, especially helping people with headaches or epilepsy.