The Painting of the:
Dura Europos Baptistery

"Arise, kindle your torches and by their shining light receive the King of Heaven.” 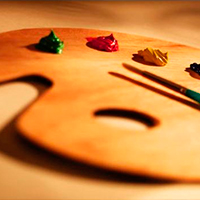 The earliest surviving paintings for a Christian churchare in New Haven, Connecticut. They once decorated the baptistery of a house-church in Dura Europos, a Hellenistic town on the bank of the Euphrates, which from 165 AD was a Roman military garrison at the very eastern boundary of the empire. Around 256, Dura fell to the Sasanian empire, was not resettled, and was covered over by desert for more than 1600 years. The town began, Pompeii-like, to re-emerge from the sand in the 1920s in excavations by the French Académie des Inscriptions et Belles-Lettres and Yale University and so did the house-church and its paintings. Yale brought the paintings back to New Haven as part of their share of the booty and recently reinstalled them lavishly in the Yale University Art Gallery.

In 240 Dura Christians remodeled a house built eight years earlier abutting the western city wall to serve as a place for Eucharistic assembly and converted one room into a baptistery equipped with paintings and a niche for a baptismal basin. In the time before Christians assimilated imperial architectural values in marble basilicas, they worshiped in domus ecclesiae. Minucius Felix had had his Christian apologist Octavius say, around 200: “Do you think we are concealing what we worship if we have neither temples nor altars?... What temple would I build for him, when this whole world he made cannot contain him?” The Dura house-church had less than 20 years to serve before the town fell.

The baptistery artwork is modest (in comparison with the synagogue and Mithraeum, two other religious buildings in town whose paintings survive), but the small congregation wanted to solemnize the room where catechumens would be initiated into the Christian mystery. They chose a series of subjects (roughly in the order you would encounter them entering the room):

a procession of women with torches;

Jesus heals the paralytic at Bethesda who then takes up his mat in John 5;

Jesus helps Peter to walk on water in Matthew 14;

a woman at a well;

under a niche for the baptismal oils, David slays Goliath;

and, over the baptismal basin, the Good Shepherd with a sheep and Adam and Eve.

The iconography of two of these is uncertain. Is the woman at the well the Samaritan of Sychar of John 4? Is it Rebecca, Rachel, or Zipporah waiting to meet her spouse? Is it Mary, who in the Protoevangelium of James received the Annunciation while drawing water? Is it deliberately and richly ambiguous? And are the women with torches, the best preserved of the paintings, those on their way to Jesus’ tomb on Easter morning? More likely, because the star indicates nighttime and because of their prominence in Patristic baptismal preaching, these are the wise virgins of  Matthew 25 going out to meet the bridegroom with torches lit.

The images are good to think with: what significance did the designers find in these subjects for understanding the sacrament of baptism? One theme, of course, is that of water and its Lord: Jesus enables Peter, who does not flounder here, to walk on the water; he heals at the pool of Bethesda (whose water, in the depiction, flows uninterrupted between Sea of Galilee and Bethesda); he promises at the well of Sychar waters of eternal life. The Good Shepherd of Psalm 23 leads the sheep to restful waters, restores the soul, and prepares a table. Another theme is forgiveness of sin: the Samaritan woman has had many men; Jesus tells the paralytic “sin no more”; Adam and Eve evoke the original sin above the basin of its remedy.

Developed subtly also is a nuptial theme: in baptism we find a spouse and celebrate a wedding feast. The prudent virgins are ready for the bridegroom. The Biblical women at the well in various ways hear the call of God and meet their spouse. Adam and Eve begin and end the nuptial imagery of John Paul’s “primordial sacrament.”

This cluster of associations is recognizable in the Greek Fathers. David battled Goliath and was anointed king. In a baptismal catechesis, Chrysostom said: “The chrism is a mixture of olive oils and perfume, perfume as for a bride, oil for an athlete.”

In a sermon on the paralytic, Cyril of Jerusalem, as do the paintings, connects Kinneret and Bethesda: “You have him who walks upon the waters… and vouchsafed the like power to Peter. There stood by the waters of the pool the ruler and maker of the waters.”

Many Fathers see baptizands in the wise virgins. Chrysostom, in a baptismal instruction: “Arise, kindle your torches and by their shining light receive the King of Heaven.” Gregory Nazianzen: “The torches that you kindle are a sacrament of the procession of light hereafter, with which our beaming and virginal souls will greet the bridegroom, beaming with the torches of faith… and good works…” Aphrahat: “All the pure virgins who are betrothed to Christ shall light their lamps and with the Bridegroom shall they go into the marriage chamber.”

The Christian building at Dura reminds us that persecution under the empire was intermittent in time and place. The Christians who commissioned the baptistery did not fear to use the same decorative style, and perhaps even hire the same workmen as for the niche for the shrine of the torah scroll in the synagogue, or the shrine of Mithra in the Mithraeum. The Christians of these two decades in a distant outpost of the Roman empire were imaging what Catechism 1617 recovers from tradition: “Baptism, the entry into the People of God, is a nuptial mystery…, the nuptial bath which precedes the wedding feast, the Eucharist.”