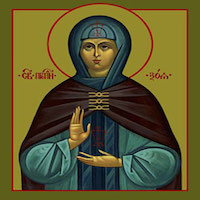 Married to Saint Exsuperius. Mother of Saint Cyriacus and Saint Theodulus. Slave, owned by a rich devout worshipper of the ancient Roman gods in Attalia, Pamphylia. Zoe’s job was to tend the house dogs and prevent them from biting visitors, and she rarely saw her husband as he worked the fields far from the house. Since she worked near a roadway, she gave of her own meagre rations to those even poorer than herself. One pagan feast day, the family of slave saints was given meat to sacrifice to an idol. They refused, and the entire family was tortured and murdered. Burned to death c. 127