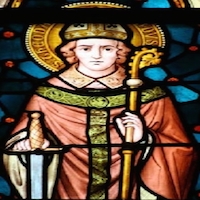 Born to a wealthy family of the French nobility. Excellent student in both secular and Church topics; as a sub-deacon he helped settle a dispute at a synod at Toulouse, France. Benedictine monk at the Saint Martin monastery in Montauriol, France; it was later renamed Saint Audard in his honour. Arch-deacon of Narbonne, France where he became known as a great minister to the poor and suffering. Archbishop of Narbonne, France, consecrated on 15 August 885. Received the pallium from Pope Stephen VI in 886. Spent largely to ransom Christians captured by Saracens, and to re-build suffragan dioceses damaged by the invaders.