Blessed are the merciful for they will be shown mercy 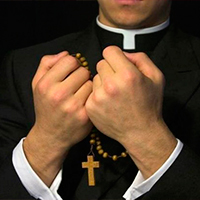 The priest of Ambricourt is a saint. We do not realize it until the novel ends. He never realizes. As we read, we suffer with the young curé of Ambricourt as he struggles with the spiritual indifference of his flock, his painful illness, his fear of death, the misunderstanding of his fellow priests and God himself in prayer. As Robert Coles said in a 1986 article in the New York Times, “This young priest dies of cancer, having felt himself to have failed both his church and his own personal ideals. We know otherwise, however, we who have been exposed to this diary, this account of one soul’s arduous ascent toward its Maker”. 1

It is indeed an arduous ascent, but ultimately rewarding. I would sum up the whole novel in one phrase from the Gospel of Matthew, “Blessed are the merciful, for they will be shown merciful” (Mt 5, 7).

I would like to justify this choice of a summary by focusing on two important moments. The first is the climax a little more than halfway through the book. Our hero has been battling through his priestly obligations over the past few weeks. He finds himself embroiled in a family dispute of the local gentry. Mademoiselle Chantal is being sent away by her parents to a boarding school, and is very upset about the whole thing. The priest is discussing the matter with her mother and the true reasons for the decision come out little by little. Monsieur le Comte is in an affair with the governess and Chantal has found that out and is waging a domestic war on her that is destroying the household peace.

Madame la Comtesse has grown indifferent to the infidelities of her husband and hard to the sufferings of her daughter. She tells the priest:

Indifference before sin and indifference to the sufferings of others. Could we find a better illustration of the complete opposite of mercy than the words of Mme. la Comtesse, “Can’t she go through what I’ve had to go through?”

The priest does not turn away. He, normally so awkward and slow in conversation, finds the words pouring from his mouth and heart. He seeks to break the barrier of her indifference with one of the most powerful phrases of the whole book, “Yes, madame, one gets used to not loving. Satan has profaned everything, even the resignation of the saints” .2

This is true mercy. The good shepherd is in search of his sheep. It turns out that the wounds in the countess’ soul are very deep and she opens up to the priest in a way she has done to no one before. For years she has been angry with God for the death of her young son. Since then she has lived in indifference, neither giving nor receiving love nor affection. She has gotten very used to not loving. Her husband and her daughter have not received any affection through all the years of her grief. She has become almost completely impervious to the sufferings of others. But not to God ́s grace.

Little by little, the young priest leads her back to God. She is able to let go of all the bitterness in her heart and is reconciled to God and man. He leaves her in peace to return to his work. The next day comes the surprise. She had died of a stroke that night. The priest has been an instrument of mercy for a poor soul in her last hours of life.

The priest of Ambricourt was an instrument of God ́s mercy to the suffering countess. But her family does not repay him in kind. Mlle. Chantal, the daughter, was eavesdropping and when she saw the peace that had filled the heart of her mother, she grew jealous and full of hatred for the priest. She tries to use the situation to her advantage, telling her father that the priest had distressed the countess and so brought about the stroke. Stories begin to be spread about that the priest is a drunkard, manipulating the fact that a peasant girl found him unconscious along the side of the road one night. We know that he had a hemorrhage and passed out because of the pain. He is sick but does not know what is wrong and his deteriorating physical condition only confirms the gossips.

Blessed are the merciful, but there is no mercy for priest of Ambricourt. Speaking about Bernanos’ vision of good and evil, Thomas Molnar wrote, “Gradually the Bernanosian vision became more focused. It is a dualism whose two parts are reconciled in the douce pitie‘ de Dieu (God’s sweet mercy) –but not before, not this side of history”. 3

God’s sweet mercy but not this side of history.

The next moment I would like to emphasize is the novel’s ending. The priest has finally made it in to meet a doctor, an agnostic expert who is suffering from his own terminal illness. When he discovers that he is dying of stomach cancer, the young priest is overwhelmed. He struggles to put his faith in God, but nothing seems to make sense to him. He has just been trying to encourage and support the doctor who is dying, but in his own life he feels so helpless.

Too ill to return home, he goes to the nearby home of a friend, an ex-priest who is living with a woman. There the hemorrhages return and he is near to death. They send for a priest to bring the oils and viaticum. But death is too close. His friend confesses and absolves him and tells us, “He then uttered these words in my ear. And I am quite sure that I have recorded them accurately, for his voice, though halting, was strangely distinct. ‘Does it matter? Grace is everywhere...’I think he died just then”. 4

In a 1934 essay about Joan of Arc, Bernanos wrote:

Our Church is the Church of the saints. To be a saint, what Bishop would not give his ring, his mitre, and his crosier; what Cardinal his purple; what Pope his white robe, his Chamberlains, his Swiss Guard, and all his temporal power? Who does not long for the strength to set forth on so glorious an adventure? For sanctity is an adventure; it is indeed the only adventure. 5

They will be shown mercy. Holiness, making it to heaven, is there any better way to be shown mercy? All the rest does not matter. For the one who believes, the only true reward is heaven, and it is a gift.

And it is a gift that is everywhere, if we only look for it. God’s mercy was there for the countess, the count, their daughter Chantal, for the young priest, for everyone in the story. Just not everyone was looking for it. Not everyone was open to it. Those who were too proud did not look for mercy and did not find it. Those who could not show mercy and love towards others could not receive mercy. The priest knew that he needed God ́s mercy. He gave that mercy and love to others.

Is this view of God’s mercy only a novelistic and melodramatic way of seeing it? I think that in reality, Bernanos had a deep understanding of holiness and mercy. He knew that it was not easy to be a saint. He did not want to portray a saint as someone different than rest of us. He knew that holiness depends most of all upon God’s action in the soul. This is typical of all of Bernanos novels, and probably best achieved in The Diary of a Country Priest. As Mark Bosco put it,

His protagonists are often saint-heroes whose virtues lie not in superheroic, conventional saintliness but precisely in their human frailty. Bernanos’s heroes, many of them priests, do not surpass humanity but assume it to its fullest consequences. 6

For Bernanos, the saint is a man of mercy. He is an instrument of God ́s mercy for many others. He seeks to bring mercy to each person he encounters. Because he needs mercy himself, and the Lord will give it to him.

“Blessed are the merciful for they will be shown mercy”