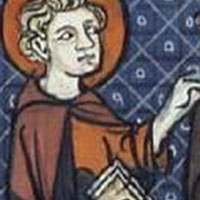 Son of an Irish prince. Related to Saint Foillan and Saint Ultan of Péronne. Educated by Saint Brendan the Voyager. Priest. Abbot of a house at Rathmat, Ireland. Preached, evangelized, and established monasteries in Ireland for twelve years. Evangelized in England, building monasteries. Evangelized in France, working with Saint Blitharius; they had great success. Clovis, king of the Franks, received him, and asked that he build a house at Lagny, France. Raised the young son of a court nobleman from the dead. Given to ecstacies and trances during which he received visions of a immense struggle between good and evil, with glimpses of heaven and hell.

The visions were described in the aptly named Visions of Fursey, and had a great effect on such works as Dante’s Divine Comedy. Bede wrote extensively and glowingly of Fursey. His image is on the banner of the city of Peronne, France.