17 practical advices to live the mass in the best way, and only depend on us.
The fruit of every Mass for our souls depends primarily on the preparation and readiness with which we attend. 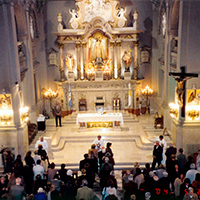 Fernando Poyatos Guide “for a full experience of the Holy Mass"

There are those who throughout their life have attended Mass every Sunday, and even every day, "without recognizing that what happens in it, always had to touch his heart."

That change is one of the purposes of Fernando Poyatos, who has been a professor at the University of New Brunswick and for many years lay agent Pastoral Care in Canada and Spain. In addition to their health professional work, collaborating in magazines such as Phase One of the most important in Spain in the liturgical context, or Dolentium Hominum, published by the Pontifical Council for Health Pastoral Care.

His concern as a writer has led him to develop their own materials for liturgical pastoral, pre-baptismal or the sick, and some of this has curdled in his last work, "Stay with us Lord". For a full experience of the Mass (Editions of Good Ink).

It´s a complete guide to knowing and living the Catholic Mass, not only intended for those who already do, but those who ignore it. It´s following step by step the prayers of ordinary priest and faithful, explained so that not only know what happens when rising to heaven, but how and why it happens, with all its theological implications.

Reading it, is possible to extract some very practical advice, and only depends on ourselves, to extract all the fruit to the mystery and miracle of the Eucharistic celebration. We focus on those for laymen, but there are also "Stay with us, Lord” for priests.

Exterior and interior changes that predispose us to better attitude (do what others do, including the priest) so that our heart is touched.

1. Respect the integrity of the celebration. Punctuality is not just a courtesy but an obligation. To go to the movies we are punctual because we consider important the beginning. Will Mass be less? “We don´t recognize the theological significance of what is happening right from the initial greeting of the priest, or the severity of losing what God was already telling”.

2. Respect the priest. With something as simple as, at the end of the celebration, not leaving our place until he has left the altar. “This attitude of impatience reflects a desire to be away as soon as possible... to fulfill (or so we think) with the commandment of God as quickly as possible and move on to other things that do not wait."

3. Put on our forehead holy water. If there is, of course. In this case, use this sacramental and even share it with those who come behind. Not as an empty gesture, but "asking the Trinity to purify us and release all that we can bring that, not being God, can harm us and distract us, to us ready for our appointment with Him."

4. Kneel before the Blessed Sacrament. Not only because it deserves this gesture of worship, but because it prepares the importance of what will happen minutes later, as so "we are recognizing the permanent Eucharistic presence of our Savior in the tabernacle of any church in the world, the same Christ who we received in Communion.”

5. Get together with others and put ourselves near the altar. It is often practice to place away from the rest of the faithful people, especially if they are not known. And everyone is familiar with the image of a string of empty benches between the altar and the first attendees. "It is a moral duty to Christ, which brings us into their home to share with us their sacrifice his brothers just get close to those who are already there, and from the first banks around the altar. Let fraternal Christian courtesy recognize the presence of the brothers whose side we sat... and Christian grace not sit without even looking at who we have next door."

6. Recognize the importance of the altar. And if not relevant genuflection to coincide with the location of the tabernacle, "never stop venerating making a deep and slow tilt from the waist, not simply head".

7. A preparatory examination. For this is necessary, of course, have come in with a few minutes in advance. Some thoughts are enough like: "What is my motivation... I bring with me things that overwhelm me or going to distract me, good or bad?" And the most important: if we are not willing to take communion, "approach the confessional before you start and stay quiet with God, He will give me absolution through his minister."

8. Consciously live the penitential act. Don´t make it a routine: "We must sincerely desire to cleanse us from few faults need to rid ourselves before coming before God and thus open up consciously (never reciting mechanically) a few favors may he grant, physically, emotionally or spiritually through the Word and the Eucharist”.

9. Listen to the Word carefully. It seems obvious, but distractions are more frequent. Poyatos enhances the whys of a particularly attentive listening: "We hope that what the Lord has to say through their scriptures touch our hearts and our brothers´... we should pay to the Word the reverent attention it deserves, and don´t let anyone or anything distract us, it´s God who is speaking to us."

10. Rethinking the homily. For many faithful, it´s a part of the decisive mass, like it or not. But beyond that, it isn´t of layman, what the priest says he says "with authority", and so it is always advisable immediately (especially if a brief silence is left), briefly review what we have just heard, from which "we can also make an application for each of us."

11. Watch out for the offertory! The Mass is a sacrifice, and therefore the offering is an essential moment. But because of its location between the voltage of the homily and the imminent peak of the consecration, and that is where usually made economic gathering, "those minutes can become unduly in a simple gap or pause in the middle of the liturgy, as a brief break". You have to react to it, and associate what the priest does at the altar.

12. How much to give? Here Poyatos who gave the floor to be (from next September 4) Santa Teresa of Calcutta: "You must give until it hurts and then you continue to give until it stops hurting".

13. Kneel (at least) in the Consecration. "Through the priest, minister and representative of Christ, will be wrought the greatest miracle you could ever imagine in humanity, the gift for us whose price was the death on the cross of God the Son, Jesus Christ, each of which we are present: the bread and wine are transformed into the Body and Blood, with his soul and divinity, his whole person is it possible to attend something different attitude than worship"?

14. The seven petitions of the Lord's Prayer. It´s such a common prayer that we can make it inconsequential. However, it contains sufficient elements for conveniently thoughtful (and the Mass is the perfect time to do so), it becomes "a good examination of conscience" and just before receiving Communion.

15. By giving peace... We live properly the rite "not just wishing them peace of truth, but at that time praying for them mentally."

16. "I'm not worthy." We say before receiving Communion, and it's true! So Poyatos recalls the "silent meditation” before that time, as "the fruit we receive will be in direct proportion to our availability and readiness proportion”. He adds that even that moment is “the only one we isolate ourselves from the brothers and pick us up in ourselves."

17. A little bit makes a difference. "It´s good, if we can, spend a few moments in the church after Mass, even better in the Blessed Sacrament chapel, before the tabernacle, that is, with the Lord and with ourselves. And there, with Him alone, try to see what has made us this Eucharistic celebration, if something has affected us."

"Stay with us, Lord” and lays the foundation for attendance at mass produce the fruits and goods for which it was instituted the holy sacrifice of the altar. And always bearing in mind that this work is not a recipe, but a complete theological and didactic approach to all the rites of the Mass, and work completed in its appendices and diagrams with a large useful information about name and origin of the different objects sacred, sacred vestments and sacred books, description and explanation of the liturgical year.