How to be an apostle in a tough environment?
13 useful tips 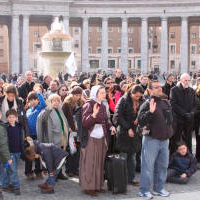 No less portion of my time is spent visiting communities, associations, movements and parishes. These visits are usually for a talk on a topic related to youth life and Christian experience.

No fewer of my experiences is to give lectures at colleges, universities, institutes and other organizations and non-Catholic young adults, sometimes they are not even Christians. They're just sitting there because they were forced to go and because the organizer of the activity is hopeful talk that touch their hearts. It´s almost never easy and almost never comfortable, but things always happen and God is always in the middle of doing something.

About that I want to share. Surely you have to look several times a year with audiences that are not interested in the topic "God," "faith," "religion" , "catechesis , "values​​" or any of the things that you are interested and are why you're standing there with everything ready to inspire and motivate a faith experience or to deepen a Christian experience.

I want to offer some ideas (not only to exit without tomatoes or eggs on the head), but for what you want to take, is received by your audience and be God who reaches the hearts, but your message. These ideas are not laws, they are not foolproof methods; they are just some strategies and principles that have been discovered in the measure that has gone wrong and I had to rethink, not to communicate well, but that God is not left halfway and let him speak through me. Not it only applies when you look faced to give talks, but when you have to argue some close topic to your faith, in your college class, at work, with a group of friends, family, etc.

"The youth ministry, as we were used to develop, has suffered the brunt of social change. Young people in the usual structures, they often find answers to their concerns, needs, problems and injuries.”( Evangelii Gaudium 105 ) .

It´s a reaction natural to begin to sweat, talk faster and stronger, and even exasperate. Don´t despair and panic. Don´t make anyone feel you're hurting, uncomfortable, trying to do something that should not be. Remember who put you there, remember what´s your motivation. This doesn´t mean to say everything and run, this means to transmit what really matters. Communicate really means something additional, so that you can change the life of people.

2. With large audiences: be close

It´s difficult to keep a large number of fully attentive people on what you are trying to share and communicate. Avoid starting by hard information: things like dates, statistics, quotations and large amounts of text; all that makes people dispersed and distracted. When the audience is large it´s easier to get to the heart than the head. It starts there. In Chile we say “strike a chord ", which refers to question them rather than specific content, with experiences and ideas that make sense to them. Make them excited as you are.

3. With small audiences: address them as you address a friend

Don´t expect it will be moved to tears when they tell a story, neither to laugh to the point of breaking into applause and laughter. Small audiences are a good place to be concrete, it´s easier to keep attentive, look into their eyes and tell them by name, as with friends. Small audiences are a good stage to give numbers, dates, lists of things, historical data and theoretical content of any type that is closest to the message, all accompanied by your personal experience.

4. Transmit an experience, don´t give information

Therefore, taking the words of Pope Paul VI, although the message you share contains content and doctrine, the hook that will keep your audience attentive is your experience and "being a Christian in real life" rather than books. But don´t forget that content is essential. Don´t stay stuck in the story, we also need structure and a solid base if don´t know where we end up.

“What happens is that I want to tell you what I wanted to say but I'm not sure I can tell you because as I say the truth is not I'm telling it...". You don´t turn or they are going to get dizzy. If you have to share be brief. You don´t need to stretch out beyond what´s necessary, and that supplementing an idea makes you shake from one side to the other without being specific and timely. Occasionally check the twitter of Pope Francis, who in less than 140 characters gives us tremendous messages and doesn´t need a whole hour.

6. Humor is a good ingredient

You don´t have to prepare a routine "standup comedy", neither have a list of jokes written to mix-up when all get distracted (although sometimes serves to have something under the sleeve just in case).

It´s a fact that some saints had a remarkable humorous vein, even they knew how to use it to transmit the charism. Such is the case -among many- of St. John Bosco who even had to do a magician and juggler with St. Teresa of Avila, with a great sense of humor but going through difficult times and many tests, he said to God in prayer: "If this is how you treat your friends, it’s no wonder you have so few!". It’s about being spontaneous, cheerful and natural -obviously keeping solemnity care if the occasion requires- . Use humor in your favor, make them laugh, laugh with them, but never laugh at them.

7. The Saints are an excellent example. Know their stories and make them known

Knowing the stories of the saints is important not only because they inspire our lives and are a model of how to follow Christ, but also because they are an inexhaustible source of anecdotes, entertaining stories, and testimonies of human fragility but also struggle and holiness, which insure the help to exemplify whatever you want to communicate.

Whenever you can, study the life of a saint to have fresh knowledge in your memory, this not only will help you muddle through with a good story, but it´s the Church itself that puts you forward to speak of God.

It´s nice that you study and get ready, in fact it would be irresponsible if you didn´t. Master what you are sharing is crucial when the audience is difficult. It´s also important to prepare a good material, they can be text slides to deliver to all attendees. Having a good support to share always makes things easier. But the most important thing is you spend time praying for those people, for you, for your conversion, to be a better apostle. It doesn´t mean that if things do not go as expected is because you prayed badly or little. God doesn´t take revenge, prayer comes as part of our apostolate, through prayer is that we find God in order to transmit it.

Don´t judge who got in front and don´t stay with their appearance. Many times we stereotype, especially with young people and older people. Don´t fall into generalizations, each one is a unique being, so give them a chance to surprise. The challenge is to keep constantly updated, to know what things they are doing in their spare time, what they see on television and the Internet, how they spend their money and energies. At the same time think about how you are when you're part of a hearing. I’ve discovered sitting watching are the best conversations of my life but backed down on the chair, arms folded, staring at the ceiling, very serious and seemingly distracted, but my heart was completely there. Consider that those who are so apathetic in front of you, they are being played not only for your message, but by God, although they have not told him to his face.

Even if you're in a class at school or at a meeting of catechesis where you need to address some content, the bottom line is you're talking about something that moves the bowels. That would never happen to stop. Having the opportunity to teach, train and support others in the faith is a gift and as an apostle who you are, you should vibrate passion for being there. Therefore, as you are sharing something that gives meaning to your life, consider doing it with passion, heart left on the court, and give everything, even a meeting for three or four people.

"This passion stir in the Church a new mission, which may not be delegated to a few 'specialists' but must involve the responsibility of all members of the People of God. Who has truly found Christ cannot keep him for themselves, they must proclaim. A new apostolic zeal to be lived as the everyday commitment of Christian communities and groups "(Novo Millennio Ineunte Letter, n. 40) is required.

There´re times that language can create barriers to communication, lending itself to mockery, misinterpretations or definitely not to understand anything of what you mean. Imagine you're in an activity of evangelization and one of your slides invite them to be apostles and you title it: "Be fishers of men." We here in the boat understand you, but certainly more than someone is going to misinterpret. The list of things that only we understand is immense, watch these expressions to communicate better with those who aren´t familiar with them. There are theological and philosophical concepts that most people are unfamiliar. An evangelist is a translator explaining the teachings of the Church language easy to get to to all.

12. Sometimes you just have to shut up

Although there have been few times it happened to me, that those who are in front of me, not only are apathetic or are distracted, they are aggressive questioners and even violent in their language. I certainly would not wish anyone to be in such a situation, it´s very uncomfortable. We must learn that there are times when we must learn to be silent. It isn´t a lost fight, it´s about discerning the times when it´s not worth giving any fight, as it´s meaningless. In my experience, when someone wants to attack the faith, the Church and God, that's what he wants: to attack, and whatever we say we won´t make him change his mind. All that will achieve is that to radicalized more his position and we in ours being increasingly away from each other. Does that discussion did anything?

The idea is to leave this for you to add another point you think we are missing empty space in this gallery and so this can help others from your experience :)

Come on! Continue to persevere, seek new strategies and don´t give up! Even those who are against you have a face that don´t care what you're sharing.