The Smartphone has changed our lives: 10 risks that you should avoid.
Addiction, anxiety, less empathy, accidents, family disconnection, interfering on a relationship, among other dangers. 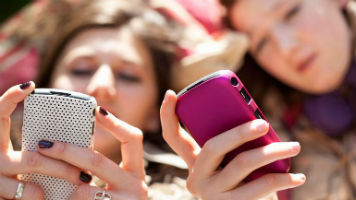 We use it more than 200 times a day, and almost 90% of internet users benefit from it. Addiction, anxiety, less empathy, family disconnection, accidents, interfering on a relationship, among other dangers.

In less than a decade, the Smartphone has overcome the complete performance of society, by changing the way of socializing, and the behavior of most people. We use it every minute, and it has come to be an essential thing in communication.

Nobody doubts the great advantages that a Smartphone has. It´s the most used technology according to CIS from last March. In fact, a research from the British consultant, Tecmark, says that in average people use their phones more than 220 times a day. “Telefonica Foundation” says that 83.3% internet users are connected, according to March 8th issue of “Magazine de la Vanguardia”. You can use it for WhatsApp and other functions, to have internet access, to login to social networks like twitter, Facebook, Instagram or Snapchat. But it also works as a watch, to look at the weather, calculator, listen to music and the radio, read newspapers; you can send and receive pictures and videos; pick a restaurant, buy, sell and many other things online.

But not everything are advantages, using a smartphone can bring some inconvenient and risks. Let´s see the top ten risks.

Like Nir Eyal says, USA expert in psychology and technology, author of the book “Hooked”, we are addicted to the cellphone.

In his book, Eyal explains the reason of this: services and apps are designed to have the attention of the consumer most of the time. The way to do this is by motivation, to offer something that people desire, to make easy some task, and use triggers of behavior that enhance the habit, for example likes, retweets, comments, etc.

In fact, phones manufacturers have psychologists and anthropologists to observe the behavior in every place so they can evolve the product.

Due to the things mentioned before, a risk can be that the unappropriated use of a smartphone creates addiction, and the thing is to find a way to end the exaggerated time of use of a smartphone. “Everything depends on what you do in the digital world”, says Manuel Armayones, professor of Universitat Oberta of Catalunya, who just published “Smartphone effect, connecting with means.”

“Common sense says that we have an inappropriate use of the cellphone when it brings problems to a person, endangers their relationships with family and significant others, work or good academic results… What´s important is to be conscious when this danger comes”, he says.

The psychology professor warns parts and their children “let´s get use to the idea that will be a constant: when you´ve already deal with the use of Instagram (amount of time, what can be shared), Periscope and it´s videos are the new trend”.

“Now we have a gap age between analogical parents and digital children, but there will always be two speeds: people more technologically qualified or with an intensive use of this and the ones that not”, he concluded.

Three out of four young people between 18 and 24 years, first thing in the morning they check their phones, according to a poll. If the phone isn´t close, if it got lost or doesn´t work, chances are that this will create an anxiety state in the owner.

Americans, named this anxiety as FOMO (fear of missing out), it´s a fear to missed something if you´re not looking at your phone. Armayones defines this as a type of pathology, a fear of forgetting your mobile or the anxiety that loosing battery, or your credit creates. “This aren´t bad mental diseases, but they generate stress and anxiety”, he says. The way to avoid this is: “Make friends, do a sport, have a hobby that doesn´t involve your cellphone”.

Sherry Turkle professor of Social Sciences and Technology of MIT, warns us about losing intimacy in the human relationships. In an interview with Pew Research Center, 89% of people said they used their phone in their last social gathering, and 82% said that conversation suffered.

“It´s been proved that if two people meet and there’s a phone on the table, the conversation goes to less important points, and this people feel like they´re connecting less”, says the psychologist of MIT. “When we look our phone instead to look at the person in front of us, you lose empathy and intimacy. In the last 20 years there´s been a decrease of the 40% in the empathy between college students in every possible way. The greater decrease has been in the last ten years, which is related to the use of cellphones. It´s in the face to face conversation that empathy comes with the intimacy, we pay a price if we let this conversation to become a simple connection” she concludes.

Another risk of the bad use is a Smartphone is the disconnection it can create in a family. In fact, some parents pay more attention to their phones than to their children.

In that sense, Turkle has also studied the effect in personal relationships. What came as the sharpest thing in the research for his book “Reclaiming Conversation” was “that children and teenagers said that they had never walked with her parents without them being on the phone, they feel like they don´t have the attention of their parents”.

The social sciences and technology teacher thinks that the time we spent in our cellphone “we steal it to the time we spend with others, because we carry it every time and everywhere”.

The CIS barometer mentioned before, has a high level of people interviewed (44%) that says that mobile technology is the one that has changed more life in the family (just 7.7% said TV). In other things, 67.9% thinks that it has reduced the communication between parents and children, and 51.5% that it increase conflicts in the family. American therapists said that some families reach them to “reconnect”.

Another important matter is the obsession in keeping the eyes in the cellphone screen, which may cause an accident. This is a huge tendency, and in many cities they have implemented measures to avoid this.

Till 47% of walkers does it, according to “Real Automóvil Club de Catalunya”, and this has favored the increase in the accidents.

And this same thing happens with transit: the cellphone has substituted the alcohol as first reason of distraction by young Americans, and Spanish policemen, and it´s the first cause of accidents.

“Yes, technology is changing social habits and our brain, and we don´t know the consequences this will bring on a long term”, says Eyal.

There´s no doubt that using a cellphone enables conversation, and for example couples relationships. But, at the same time it´s a tool to control this. This is such a big deal that many relationships starts with a cellphone and because of one.

In the studies that people are asked if the cellphone interferes in their relationship (included the CIS), the answer is mostly yes, to the point that 9% of Americans admitted in a poll using it during intercourse.

A new inconvenient that could end in trouble is that we think it´s more difficult to maintain a spontaneous conversation, like the ones face to face.

“People is avoiding it by using the cellphone so they don´t feel vulnerable”, Turkle says, and sets for an example parents and children that argue in WhatsApp to keep feelings under control.

“Online conversations attracted us because we can prepare, because we have flaws in the presentation. We reassure ourselves if we can hide under an auto presentation” he adds.

“Sometimes people become their best selves online; other ones don´t recognize themselves in a digital world, they feel unauthentic, so they are depressed. It´s more difficult to find an authentic self”, concluded Turkle.

The inadequate use of cellphones it´s also responsible sometimes of attacks on privacy. American parents upload around a thousand photos of each children they have before they´re five years old, Time magazine explained.

“It´s said that children and teenager are narcissists, but maybe they´re learning exhibitionism from their parents”, the article said. And it also mentioned that there’re some social networks used by young people to upload sexy selfies Pictures with a resemblance of the ones their mothers upload.

“Technology is marvelous, what can be questioned it´s the use of this”, Armayones says, and he also says that if the trend of posting videos in real time, “complex situations may occur, socially and psychologically”.

And because of that he claims “etiquette use for cellphones, and other technologies. If two people meet for dinner, and one starts reading a book this is considered impolite, but with the cellphones this always happens”.

Another polemic thing in the use of a smartphone is knowing if this helps or affects the concentration in students.

About this, the writer and specialist on technology, Nicholas Carr, says that cellphones make us inattentive and superficial, and avoids that students concentrate during and specific time.

Nonetheless, studying centers have differences about allowing them or not, because it distracts people but also not having it creates anxiety.

“It´s a sign that we can put attention in another thing. This decision is from the user, but this tempts us and make us vulnerable” Turkle reflects.

Some studies said that the digital world changes memory (Google effect), other ones said that this doesn´t affect it. Some defend that it helps the memory develop, and this same debate takes place with analytic thought.

“Nowadays, we managed more information than ever, and we use the cellphone´s memory or the cloud as an extension of ours, to save things, but in our brain we still storage the important for us”, concludes Armayones.