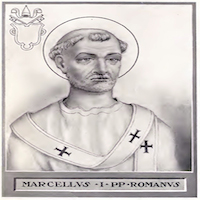 Nothing of Marcellus' life before his papacy has survived the centuries. He became Pope at the end of the persecutions of Diocletian in aound 308-309. The persecutions had disrupted the Church so much that there had been a gap of over a year with no Pope. Once he was elected, he faced several challenges, including reconsituting the clergy, which had been decimated and whose remnant had practiced their vocation only covertly and with the expectation of martyrdom. He worked hard to recover and welcome back all who had denied the faith in order to keep from being murdered.

When a group of the apostacized, known as the Lapsi, refused to do penance, Marcellus refused to allow their return to the Church. The Lapsi had a bit of political pull, and some members caused such civil disruption that emperor Maxentius exiled the Pope in order to settle the matter. Legend says that Marcellus was forced to work as a stable slave as punishment, but this appears to be fiction, however we do know that he died of the terrible conditions he suffered in exile, and is considered a martyr because of that.

He was initially buried in the cemetery of Saint Priscilla in Rome, but his relics were later transferred to beneath the altar of San Marcello al Corso Church in Rome where they remain today.