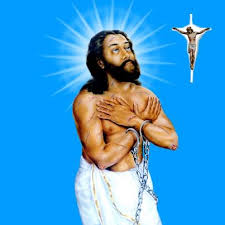 Raised a high-caste Hindu. Knew Sanskrit, Tamil and Malayalam, and studied martial arts and archery. Married layman. Convert, baptized on  May 14, 1745 in the diocese of Kottar, India, and taking the name Devasahayam, the Tamil equivalent of the meaning of the name Lazarus. He drew the ire and fell into confrontation with authorities because he mixed with lower castes. Arrested on 23 February 1749 for his faith, he was tortured and abused, and then for three years was hauled from village to village as an example of what would happen to Christian converts. He spent the time in prayer and teaching any who would listen, and priests would sneak him Communion in his cell. Martyr.

He died shot by firing squad January 14, 1752 in Aralvaimozhi, Tamil Nadu, India. His body was thrown onto a rock pile and left for the wild animals.
He remains recovered and buried in front of the altar of the Church of Saint Francis in Kottar, India