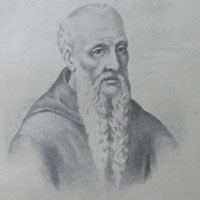 A Franciscan missionary of a Czech family named Mattiussi, born at Villanova near Pordenone, Friuli, Italy, about 1286; died at Udine, 14 January 1331. About 1300 he entered the Franciscan Order at Udine. Towards the middle of the thirteenth century the Franciscans were commissioned by the Holy See to undertake missionary work in the interior of Asia. Among the missionaries sent there were John Piano Carpini, William Rubruquis, and John of Montecorvino. Odoric was called to follow them, and in April, 1318, started from Padua, crossed the Black Sea to Trebizond, went through Persia by way of the Tauris, Sultaniah, where in 1318 John XXII had erected an archbishopric, Kasham, Yezd, and Persepolis; he also visited Farsistan, Khuzistan, and Chaldea, and then went back to the Persian Gull. From Hormuz he went to Tana on the Island of Salsette, north of Bombay. Here he gathered the remains of Thomas of Tolentino, Jacopo of Padua, Pietro of Siena, and Demetrius of Tiflis, Franciscans who, a short time before, had suffered martyrdom, and took them with him so as to bury them in China. From Salsette he went to Malabar, Fondaraina (Flandrina) that lies north of Calicut, then to Cranganore that is south of Calicut, along the Coromandel Coast, then to Meliapur (Madras) and Ceylon. He then passed the Nicobar Islands on his way to Lamori, a kingdom of Sumoltra (Sumatra); he also visited Java, Banjarmasin on the southern coast of Borneo, and Tsiompa (Champa) in the southern part of Cochin China, and finally reached Canton in China. From Canton he travelled to Zaitoum, the largest Chinese seaport in the Middle Ages, and Che-kiang, and went overland by way of Fu-cheu, the capital of the province of Fokien, to Quinsay (Hangcheufu), celebrated by Marco Polo. He remained in China and went to Nanking, Yangchufu, and finally travelled by the great canal and the Hwangho River to Khan-balig or Peking, the capital of the Great Khan. At that time the aged Montecorvino was still archbishop in Peking, where Odoric remained three years. On his return journey he went overland by way of Chan-si through Tibet, from there apparently by way of Badachschan to the Tauris and Armenia, reaching home in 1330.

In May, 1330, at the request of his superior, Guidotto, Odoric dictated an account of his travels to Brother William of Solagna while at the monastery of Saint Anthony at Padua. According to another version Henry of Glatz, who was at that time staying at the papal court at Avignon, made notes of the accounts given by Odoric’s travelling companions and wrote them out at Prague in 1340. Unfortunately, Odoric accepted many fabulous stories and for a long period it was doubted whether he had really seen all the places and regions he described. His narrative, though, is veracious, and he is the first European traveller from whom are learned many peculiarities of the Chinese people and country which Marco Polo did not mention, because he had grown accustomed to them. It is to be regretted that he does not give a more detailed account of Tibet and Lhasa, the capital of the Dalai-Lama, which he was the first European to enter. The account of his travels was widely spread by Mandeville’s plagiarisms from them, Mandeville’s work being exceedingly popular in the later Middle Ages and much used as a manual by geographers of that period. Numerous manuscripts of Odoric’s travels were current in Italy, France, Germany, and England. They were first printed at Pesaro. A Latin version appeared in Marcellino da Civezza’s “Storia universale delle missioni Francescane”, III (Rome, 1859), 739-81; an English translation was made by Yule in his work “Cathay and the Way Thither”, I (London, 1866), 1-162; a French version with very good notes was made by Henri Cordier “Les voyages en Asie au XIVe siècle du bienheureux frère Odoric de Pordenone” (Paris, 1891).