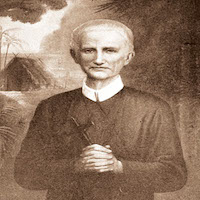 Missionary among the lepers, born at Tilburg in Holland, 27 October 1807. Died 14 January 1887. He desired from his early childhood to be a priest, but he had to begin life as a worker in a factory. He afterwards became a servant in a college where he learned a little and made great progress in virtue. Later, a benefactor enabled him to pursue his theological studies in the College of Herlaar.

A chance reading of the “Annals of the Propagation of the Faith” determined his vocation for foreign missions. He was accepted in 1839 for Dutch Guiana as a missionary, ordained priest the following year, and in 1842 arrived at Paramaribo to begin his long apostolic career. He laboured with success among the blacks in the plantations, and by 1850 had instructed and baptized 1200. In the epidemic of 1851 his labours were superhuman, till, like his fellow-priests, he too became a victim.

Before he was convalescent he not only resumed his work among the blacks, but extended it to the Indians of Saramaca. In 1855 he took up his residence in Batavia where for nearly thirty-two years he ministered to 600 lepers. He left them only to visit the blacks and Indians. In 1865 the whole colony was confided to the Redemptorist Fathers by the Holy See and the King of Holland. Father Donders at once asked to be of their number and was received in Paramaribo, in 1867, by Monsignor Swinkels, the first Redemptorist vicar Apostolic. After this,  he went back to his charge.

He studied music to cheer his afflicted children, and though given an assistant, he laboured to the end. The process for his beatification has been placed before the Congregation of Sacred Rites.