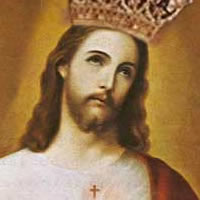 Shaddai, God of the mountain,
You who make of our fragile life
the rock of your dwelling place,
lead our mind
to strike the rock of the desert,
so that water may gush to quench our thirst.
May the poverty of our feelings
cover us as with a mantle in the darkness of the night
and may it open our heart to hear the echo of silence
until the dawn,
wrapping us with the light of the new morning,
may bring us,
with the spent embers of the fire of the shepherds of the Absolute
who have kept vigil for us close to the divine Master,
the flavour of the holy memory.

1. LECTIO
a) The text:Luke 23, 35-43
35 The people stayed there watching. As for the leaders, they jeered at him with the words, 'He saved others, let him save himself if he is the Christ of God, the Chosen One.' 36 The soldiers mocked him too, coming up to him, offering him vinegar, 37 and saying, 'If you are the king of the Jews, save yourself.' 38 Above him there was an inscription: 'This is the King of the Jews'. 39 One of the criminals hanging there abused him: 'Are you not the Christ? Save yourself and us as well.' 40 But the other spoke up and rebuked him. 'Have you no fear of God at all?' he said. 'You got the same sentence as he did, 41 but in our case we deserved it: we are paying for what we did. But this man has done nothing wrong.' 42 Then he said, 'Jesus, remember me when you come into your kingdom.' 43 He answered him, 'In truth I tell you, today you will be with me in paradise.'
b) A moment of silence:

Let us allow the voice of the Word to resonate within us.

3. ORATIO
Psalm 145
I shall praise you to the heights, God my King,
I shall bless your name for ever and ever.
Day after day I shall bless you,
I shall praise your name for ever and ever.
Great is Yahweh and worthy of all praise,
his greatness beyond all reckoning.
Each age will praise your deeds to the next,
proclaiming your mighty works.
Your renown is the splendour of your glory,
I will ponder the story of your wonders.
They will speak of your awesome power,
and I shall recount your greatness.
They will bring out the memory of your great generosity,
and joyfully acclaim your saving justice.
Yahweh is tenderness and pity,
slow to anger, full of faithful love.
Yahweh is generous to all,
his tenderness embraces all his creatures.
All your creatures shall thank you, Yahweh,
and your faithful shall bless you.
They shall speak of the glory of your kingship
and tell of your might,
making known your mighty deeds to the children of Adam,
the glory and majesty of your kingship.
Your kingship is a kingship for ever,
your reign lasts from age to age.
Yahweh is trustworthy in all his words,
and upright in all his deeds.
Yahweh supports all who stumble,
lifts up those who are bowed down.
All look to you in hope
and you feed them with the food of the season.
And, with generous hand,
you satisfy the desires of every living creature.
Upright in all that he does,
Yahweh acts only in faithful love.
He is close to all who call upon him,
all who call on him from the heart.
He fulfils the desires of all who fear him,
he hears their cry and he saves them.
Yahweh guards all who love him,
but all the wicked he destroys.
My mouth shall always praise Yahweh,
let every creature bless his holy name for ever and ever.

4. CONTEMPLATIO
Lord, it sounds strange to call you King. One does not get close to a King easily… And, instead, today I find you sitting beside me, in the ditch of sin, here, where I would never have thought to find you. Kings are in palaces, far from the difficulties of the poor people. You, instead, live your Lordship wearing the worn out clothes of our poverty. What a great feast for me to see you here where I went to hide myself so as not to feel the indiscreet looks of human judgment. On the edge of my failures whom have I found if not you? The only one who could reproach me for my incoherence comes to look for me to sustain me in my anguish and in my humiliation! What great illusion when we think that we should come to you only when we have attained perfection… I would want to think, that you do not like what I am, but perhaps, it is not exactly like that: I do not like what I am, but for you, I am alright, because your love is something special which respects everything in me and makes of every instant of my life a space of encounter and of gift. Lord, teach me not to get down from the cross with the absurd pretension of saving myself! Grant that I may know how to wait, at your side, the TODAY of your Kingdom in my life.