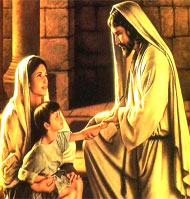 1) Opening prayer
Father of all that is good,
keep us faithful in serving you,
for to serve you is our lasting joy.
We ask this through our Lord Jesus Christ, your Son,
who lives and reigns with you and the Holy Spirit,
one God, for ever and ever. Amen.

2) Gospel reading - Luke 20,27-40
Some Sadducees -- those who argue that there is no resurrection -- approached Jesus and they put this question to him, 'Master, Moses prescribed for us, if a man's married brother dies childless, the man must marry the widow to raise up children for his brother. Well then, there were seven brothers; the first, having married a wife, died childless. The second and then the third married the widow. And the same with all seven, they died leaving no children. Finally the woman herself died. Now, at the resurrection, whose wife will she be, since she had been married to all seven?'
Jesus replied, 'The children of this world take wives and husbands, but those who are judged worthy of a place in the other world and in the resurrection from the dead do not marry because they can no longer die, for they are the same as the angels, and being children of the resurrection they are children of God.
And Moses himself implies that the dead rise again, in the passage about the bush where he calls the Lord the God of Abraham, the God of Isaac and the God of Jacob. Now he is God, not of the dead, but of the living; for to him everyone is alive.'
Some scribes then spoke up. They said, 'Well put, Master.' They did not dare to ask him any more questions.


3) Reflection
• The Gospel today gives us the discussion of the Sadducees with Jesus on faith in the resurrection.
• Luke 20, 27: The ideology of the Sadducees. The Gospel today begins with the following affirmation: “The Sadducees affirm that there is no resurrection”. The Sadducees were an elite type of great landowners or large estates and traders. They were conservative. They did not accept faith in the resurrection. At that time, this faith was beginning to be valued, appreciated by the Pharisees and by popular piety. This urged the people to resist against the dominion of the Romans and of the priests, of the elders and of the Sadducees; the Messianic Kingdom was already present in the situation of well being which they were living. They followed the so called “Theology of Retribution” which distorted reality. According to that Theology, God would pay with riches and well being those who observed the law of God and would punish with suffering and poverty those who do evil. Thus, one can understand why the Sadducees did not want any changes. They wanted religion to remain just as it was, immutable like God himself. And for this, to criticize and to ridicule faith in the resurrection, they told fictitious cases to indicate that faith in the resurrection would have led people to be absurd.
• Luke 20, 28-33: The fictitious case of the woman who married seven times. According to the law of the time, if the husband died without leaving any children, his brother had to marry the widow of the deceased man. And this was done in order to avoid that, in case someone died without any descendants, his property would go to another family (Dt 25, 5-6). The Sadducees invented the story of a woman who buried seven husbands, brothers among themselves, and then she herself also died without children. And they asked Jesus: “This woman, then, in the resurrection, whose wife will she be? because the seven of them had her as wife”. This was invented in order to show that faith in the resurrection creates absurd situations.
• Luke 20, 34-38: The response of Jesus which leaves no doubts. In the response of Jesus there emerges irritation of one who cannot bear pretence or deceit. Jesus cannot bear hypocrisy on the part of the elite which manipulates and ridicules faith in God to legitimize and defend its own interests. The response contains two parts: (a) you understand nothing of the resurrection: The children of this world take wives and husbands, but those who are judged worthy of a place in the other world and in the resurrection from the dead, do not marry, because they can no longer die, for they are the same as the angels, and being children of the resurrection, they are children of God” (vv. 34-36). Jesus explains that the condition of persons after death will be totally diverse from the actual condition. After death there will be no marriages, but all will be like angels in heaven. The Sadducees imagined life in Heaven the same as life on earth; (b) you understand nothing about God: “For the dead will rise, Moses has also indicated this in regard to the bush, when he calls the Lord: the God of Abraham, the God of Isaac, and the God of Jacob. God is not God of the dead, but of the living, because all live in him”. The disciples are attentive and learn! Those who are on the side of the Sadducees find themselves on the opposite side of God!
• Luke 20, 39-40: The reaction of others before the response of Jesus. “Then some of the Scribes said: “Master you have spoken well. And they no longer dared to ask him any more questions”. Most probably these doctors of the law were Pharisees, because the Pharisees believed in the resurrection (cf. Ac 23, 6).