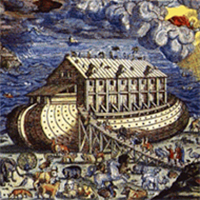 1) Opening prayer
God of power and mercy,
protect us from all harm.
Give us freedom of spirit
and health in mind and body
to do your work on earth.
We ask this through our Lord Jesus Christ, your Son,
who lives and reigns with you and the Holy Spirit,
one God, for ever and ever. Amen.

2) Gospel reading - Luke 17,26-37
Jesus said to his disciples: 'As it was in Noah's day, so will it also be in the days of the Son of man. People were eating and drinking, marrying wives and husbands, right up to the day Noah went into the ark, and the Flood came and destroyed them all.
It will be the same as it was in Lot's day: people were eating and drinking, buying and selling, planting and building, but the day Lot left Sodom, it rained fire and brimstone from heaven and it destroyed them all. It will be the same when the day comes for the Son of man to be revealed.
'When that Day comes, no one on the housetop, with his possessions in the house, must come down to collect them, nor must anyone in the fields turn back. Remember Lot's wife. Anyone who tries to preserve his life will lose it; and anyone who loses it will keep it safe.
I tell you, on that night, when two are in one bed, one will be taken, the other left; when two women are grinding corn together, one will be taken, the other left.'
The disciples spoke up and asked, 'Where, Lord?' He said, 'Where the body is, there too will the vultures gather.'


3) Reflection
• Today’s Gospel continues the reflection on the coming of the end of time and presents to us the words of Jesus about how to prepare ourselves for the coming of the Kingdom. This was an affair which produced much discussion at that time. God is the one who determines the hour of the coming of the end of time. But the time of God (kairós) is not measured according to the time of our clock (chronos). For God one day can be equal to one thousand years, and one thousand years equal to one day (Ps 90, 4; 2 P 3, ­8). The time of God goes by invisibly in our time, but independently of us and of our time. We cannot interfere in time, but we have to be prepared for the moment in which the hour of God becomes present in our time. It could be today, it could be in one thousand years. What gives us security is not to know the hour of the end of the world, but the certainty of the presence of the Words of Jesus present in our life. The world will pass, but the word of God will never pass (cf. Is 40, 7-8).
• Luke 17, 26-29: “As it was in the day of Noah and of Lot. Life goes by normally: eating, drinking, getting married, buying, selling, sowing, harvesting. Routine can include so much that we do not succeed to think about anything else. And the consumerism of the neo-liberal system contributes to increase in many of us that total lack of attention to the more profound dimensions of life. We allow the moths to enter into the beam of faith which holds up the more profound dimensions of life. When the storm destroys the house, many of us blame the carpenter: “It was badly made!” In reality, it crumbled down due to our continual lack of attention. The reference to the destruction of Sodom, as a figure of what will happen at the end of time, is a reference to the destruction of Jerusalem by the Romans in the years 70’s AD (cf. Mk 13, 14).
• Luke 17, 30-32: So it will also be in the days of the Son of Man. “So it will be in the days when the Son of Man will reveal himself”. It is difficult for us to imagine the suffering and the trauma that the destruction of Jerusalem caused in the communities, both of the Jews and of the Christians. In order to help them to understand and to face this suffering Jesus uses a comparison taken from life: “When that Day comes, no one on the housetop, with his possessions in the house, must come down to collect them, nor must anyone in the fields turn back”. The destruction will take place so rapidly that it is not worth while to go down to look for something in the house (Mk 13, 15-16). “Remember Lot’s wife” (cf. Gn 19, 26), that is do not look back, do not lose time, decide and advance, go ahead: it is a question of life or death.
• Luke 17, 33: To lose one’s life in order to save it. “Anyone who tries to preserve his life will lose it, and anyone who loses it will keep it safe”. Only the person who has been capable of giving himself/herself completely to others will feel totally fulfilled in life. Anyone who preserves life for self alone loses it. This advice of Jesus is the confirmation of the most profound human experience: the source of life is found in the gift of life. In giving one receives. “In all truth I tell you: unless a wheat grain falls into the earth and dies, it remains only a single grain, but if it dies it yields a rich harvest”. (Jn 12, 24). The motivation which Mark’s Gospel adds is important: “for my sake and for the sake of the Gospel” (Mk 8, 35). Saying that no one is capable of preserving his life by his own efforts, Jesus recalls the Psalm in which it is said that nobody is capable of paying the price for the ransom of his life: “No one can redeem himself or pay his own ransom to God. The price for himself is too high, it can never be that he will live on for ever and avoid the sight of the abyss”. (Ps 49, 8-10).
• Luke 17, 34-36: Vigilance. “I tell you, on that night, when two are in one bed, one will be taken, the other left; when two women are grinding corn together one will be taken, the other left”. This recalls the parable of the ten Virgins. Five were prudent and five were foolish (Mt 25, 1-11). What is important is to be prepared. The words “One will be taken and the other left” recall the words of Paul to the Thessalonians (1Th 4, 13-17), when he says that with the coming of the Son of Man, we will be taken to Heaven at the side of Jesus. These words “left behind” furnished the title of a terrible and dangerous romance of the fundamentalist extreme right of the United States: “Left Behind! This is a romance which has nothing to do with the real sense of the words of Jesus.
• Luke 17, 37: Where and when? “The disciples asked: Where, Lord?” “And Jesus answered: Where the body is, there too will the vultures gather”. This is an enigmatic response. Some think that Jesus recalled the prophecy of Ezekiel, taken up in the Apocalypse, in which the prophet refers to the final victorious battle against the force of evil. The birds of prey or the vultures will be invited to eat the flesh of the bodies (Ez 39, 4. 17-20; Rv 19, 17-18). Others think that it is a question of the Valley of Jehoshaphat, where the final judgment will take place according to the prophecy of Joel (Ga 4, 2.12). Others think that it is simply a question of a popular proverb which meant more or less what our proverb says: “Where there is smoke, there is also fire!”

4) Personal questions
• Am I from the time of Noah or from the time of Lot?
• A Romance of the extreme right. How do I place myself before this political manipulation of the faith in Jesus?