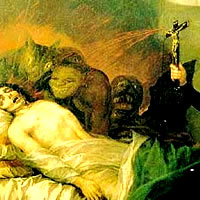 1) Opening prayer
Almighty and ever-living God,
strengthen our faith, hope and love.
May we do with loving hearts
what you ask of us
and come to share the life you promise.
We ask this through our Lord Jesus Christ, your Son,
who lives and reigns with you and the Holy Spirit,
one God, for ever and ever. Amen.

2) Gospel Reading - Luke 13,10-17
One Sabbath day Jesus was teaching in one of the synagogues, and there before him was a woman who for eighteen years had been possessed by a spirit that crippled her; she was bent double and quite unable to stand upright.
When Jesus saw her he called her over and said, 'Woman, you are freed from your disability,' and he laid his hands on her. And at once she straightened up, and she glorified God.
But the president of the synagogue was indignant because Jesus had healed on the Sabbath, and he addressed all those present saying, 'There are six days when work is to be done. Come and be healed on one of those days and not on the Sabbath.'
But the Lord answered him and said, 'Hypocrites! Is there one of you who does not untie his ox or his donkey from the manger on the Sabbath and take it out for watering? And this woman, a daughter of Abraham whom Satan has held bound these eighteen years -- was it not right to untie this bond on the Sabbath day?'
When he said this, all his adversaries were covered with confusion, and all the people were overjoyed at all the wonders he worked.

3) Reflection
• The Gospel today describes the cure of a woman who was crippled. It is a question of one of the many episodes which Luke narrates, without too much order, in describing the long journey of Jesus toward Jerusalem (Lk 9, 51 to 1928).
• Luke 13, 10-11: The situation which brings about the action of Jesus. Jesus is in the synagogue on a day of rest. He keeps the Law respecting Saturday and participating in the celebration together with his people. Luke tells us that Jesus was teaching. In the Synagogue there was a crippled woman. Luke says that she had a spirit which crippled her and prevented her from straightening up. This was a way in which the people of that time explained sicknesses. It was already eighteen years that she was in that situation. The woman does not speak, does not have a name, she does not ask to be cured, she takes no initiative. One is struck by her passivity.
• Luke 13, 12-13: Jesus cures the woman. Seeing the woman, Jesus calls her and says to her: Woman, you are freed from your disability!” The action of freeing is done by the word, addressed directly to the woman, and through the imposition of the hands. Immediately, she stands up and begins to praise the Lord. There is relation between standing up and praising the Lord. Jesus does things in such a way that the woman stands up, in such a way that she can praise God in the midst of the people meeting in the assembly. Peter’s mother-in-law, once she was cured, she stands up and serves (Mk 1, 31). To praise God is to serve the brothers!
• Luke 13, 14: The reaction of the president of the Synagogue. The President of the Synagogue became indignant seeing Jesus’ action, because he had cured on Saturday: “There are six days when work is to be done. Come and be healed in one of those days and not on the Sabbath”. In the criticism of the President of the Synagogue, people remember the word of the Law of God which said: “Remember the Sabbath day and keep it holy. For six days you shall labour and do all your work, but the seventh day is a Sabbath for Yahweh your God. You shall do no work that day”, (Ex 20, 8-10). In this reaction is the reason why the woman could not participate at that time. The dominion of conscience through the manipulation of the law of God was quite strong. And this was the way of keeping the people submitted and bent down, crippled.
• Luke 13, 15-16: The response of Jesus to the President of the Synagogue. The President condemned persons because he wanted them to observe the Law of God. What for the President of the Synagogue is observance of the Law, for Jesus is hypocrisy: "Hypocrites, is there one of you who does not untie his ox or his donkey from the manger on the Sabbath and take it down for watering? And this woman, a daughter of Abraham whom Satan has held bound these eighteen years – was it not right to untie this bond on the Sabbath day?” With this example drawn from every day life, Jesus indicates the incoherence of this type of observance of the Law of God. If it is permitted to untie an ox or a donkey on Saturday to give it water, much more will it be permitted to untie a daughter of Abraham to free her from the power of evil. The true sense of the observance of the Law which pleases God is this: to liberate persons from the power of evil and to make them stand up, in order that they can render glory to God and praise him. Jesus imitates God who sustains those who are unsteady or weak and lifts those who fall (Ps 145, 14; 146, 8).
• Luke 13, 17: The reaction of the people before the action of Jesus. The teaching of Jesus confuses his enemies, but the crowds are filled with joy because of the wonderful things that Jesus is doing: “All the people were overjoyed at all the wonders he worked”. In Palestine, at the time of Jesus, women lived crippled, bent, and submitted to the husband, to the parents and to the religious heads of her people. This situation of submission was justified by the religion. But Jesus does not want her to continue to be crippled, bent. To choose and to liberate persons does not depend on a determinate date. It can be done every day, even on Saturday!

4) Personal questions
• The situation of women has changed very much since that time, or not? Which is the situation of women in society and in the Church? Is there any relation between religion and oppression of women?
• Did the crowds exult before the action of Jesus? What liberation is taking place today and is leading the crowd to exult and to give thanks to God?

5) Concluding prayer
How blessed is anyone who rejects the advice of the wicked
and does not take a stand in the path that sinners tread,
nor a seat in company with cynics,
but who delights in the law of Yahweh
and murmurs his law day and night. (Ps 1,1-2)