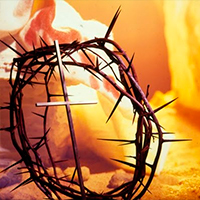 1) Opening prayer
Father,
guide us, as you guide creation
according to your law of love.
May we love one another
and come to perfection
in the eternal life prepared for us.
We ask this through our Lord Jesus Christ, your Son,
who lives and reigns with you and the Holy Spirit,
one God, for ever and ever. Amen.

Everyone was awestruck by the greatness of God. But while everyone was full of admiration for all he did, he said to his disciples, ‘For your part, you must have these words constantly in mind: The Son of man is going to be delivered into the power of men.’
But they did not understand what he said; it was hidden from them so that they should not see the meaning of it, and they were afraid to ask him about it.

3) Reflection
• The Gospel today presents the second announcement of the Passion, Death and Resurrection of Jesus. The disciples do not understand the words about the cross, because they are neither capable to understand a Messiah who becomes the servant of his brothers. They continue to dream about a glorious Messiah.
• Luke 9, 43b-44: The contrast. “Everyone was full of admiration for all he did”. Jesus said to his disciples “For your part you must have these words constantly in mind: The Son of Man is going to be delivered into the power of men”. The contrast is very big. On one side, the vibration and admiration of the people for everything that Jesus said and did. Jesus seems to correspond to all that people dream, believe and expect. On the other side, the affirmation of Jesus that he will be put to death and delivered in the hands of men, that is, the opinion of the authority on Jesus is totally contrary to the opinion of the people.
• Luke 9, 45: The announcement of the Cross. “But they did not understand what he said; for them it was so mysterious, that they did not understand the sense and were afraid to ask questions concerning this argument”. The disciples listened to him but they did not understand the words about the cross. But even in this way, they do not ask for any clarification. They are afraid to show their ignorance!
• The title Son of Man. This name appears quite frequently in the Gospels: 12 times in John, 13 in Mark, 28 in Luke, 30 in Matthew. In all, it appears 83 times in the four Gospels. This is the name which pleased Jesus the most. This title comes from the Old Testament. In the Book of Ezekiel, is indicated the very human condition of the prophet (Ez 3, 1.4.10. 17; 4, 1 etc.). In the Book of Daniel, the same title appears in the apocalyptic vision (Dn 7, 1-28), in which Daniel describes the empires of the Babylonians, of the Medes, of the Persians and of the Greeks. In the vision of the prophet, these four empires have the appearance of “monstrous animals” (cf. Dn 7, 3-8). They are animal empires which are brutal, inhuman, which persecute, dehumanize and kill (Dn 7, 21.25). In the vision of the prophet, after the anti-human kingdoms, the Kingdom of God appears which has the appearance, not of an animal, but rather of a human person, Son of Man. That is, a Kingdom with the appearance of people, a human kingdom, which promotes life, it humanizes (Dn 7, 13-14). In the prophecy of Daniel the Son of Man represents, not an individual, but rather, as he himself says, the “people of the Saints of the Most High” (Dn 7, 27; cf. Dn 7, 18). It is the People of God who do not allow themselves to be dehumanized nor deceived or manipulated by the dominating ideology of the animal empires. The Mission of the Son of Man, that is, of the People of God, consists in realizing the Kingdom of God like a human kingdom. That is, a Kingdom which promotes life, which humanizes persons.
Presenting himself as Son of Man to the disciples, Jesus makes his own this mission which is the mission of all the People of God. It is as if he would say to them and to all of us: “Come with me! This mission is not only mine, but it belongs to all of us! Let us go together to carry out the mission which God has entrusted to us, and thus realize the human and humanizing Kingdom which he dreamt!” And he did this during all his life, especially during the last three years. Pope Leo the Great said: “Jesus was so human, but so human, like only God can be human”. The more human he was, the more divine he was. The more he is “Son of Man” the more he is “Son of God!” Everything which dehumanizes persons draws away from God. That was condemned by God, who has placed the good of the human person above all the laws, above the Sabbath or Saturday (Mk 2, 27). At the moment when he was condemned to death by the religious tribunal of the Synedrium, Jesus assumes this title. When he was asked if he was “the Son of God” (Mk 14, 61), he answered that he is the “Son of Man”: “I am. And you will see the Son of Man seated at the right hand of the Almighty” (Mk 14, 62). Because of this affirmation he was declared, by the authority, guilty deserving death. He himself knew it because he had said: “The Son of Man did not come to be served, but to serve and to give his life as a ransom for many” (Mk 10, 45).

5) Concluding Prayer
For ever, Yahweh,
your word is planted firm in heaven.
Your constancy endures from age to age;
you established the earth and it stands firm. (Ps 119,89-90)