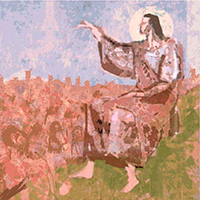 1. Opening prayer
Lord Jesus, send your Spirit to help us to read the Scriptures with the same mind that you read them to the disciples on the way to Emmaus. In the light of the Word, written in the Bible, you helped them to discover the presence of God in the disturbing events of your sentence and death. Thus, the cross that seemed to be the end of all hope became for them the source of life and of resurrection.
Create in us silence so that we may listen to your voice in Creation and in the Scriptures, in events and in people, above all in the poor and suffering. May your word guide us so that we too, like the two disciples from Emmaus, may experience the force of your resurrection and witness to others that you are alive in our midst as source of fraternity, justice and peace. We ask this of you, Jesus, son of Mary, who revealed to us the Father and sent us your Spirit. Amen.

6. Praying a Psalm
Psalm 63(62): Your love is more than life
God, you are my God, I pine for you;
my heart thirsts for you, my body longs for you,
as a land parched, dreary and waterless.
Thus I have gazed on you in the sanctuary,
seeing your power and your glory.
Better your faithful love than life itself;
my lips will praise you.
Thus I will bless you all my life,
in your name lift up my hands.
All my longings fulfilled as with fat and rich foods,
a song of joy on my lips and praise in my mouth.
On my bed when I think of you,
I muse on you in the watches of the night,
for you have always been my help;
in the shadow of your wings I rejoice;
my heart clings to you,
your right hand supports me.
May those who are hounding me to death
go down to the depths of the earth,
given over to the blade of the sword,
and left as food for jackals.
Then the king shall rejoice in God,
all who swear by him shall gain recognition,
for the mouths of liars shall be silenced.