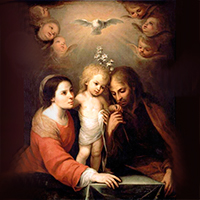 Roll of the genealogy of Jesus Christ, son of David, son of Abraham: Abraham fathered Isaac, Isaac fathered Jacob, Jacob fathered Judah and his brothers, Judah fathered Perez and Zerah, whose mother was Tamar, Perez fathered Hezron, Hezron fathered Ram, Ram fathered Amminadab, Amminadab fathered Nahshon, Nahshon fathered Salmon, Salmon fathered Boaz, whose mother was Rahab, Boaz fathered Obed, whose mother was Ruth, Obed fathered Jesse; and Jesse fathered King David.
David fathered Solomon, whose mother had been Uriah’s wife, Solomon fathered Rehoboam, Rehoboam fathered Abijah, Abijah fathered Asa, Asa fathered Jehoshaphat, Jehoshaphat fathered Joram, Joram fathered Uzziah, Uzziah fathered Jotham, Jotham fathered Ahaz, Ahaz fathered Hezekiah, Hezekiah fathered Manasseh, Manasseh fathered Amon, Amon fathered Josiah; and Josiah fathered Jechoniah and his brothers. Then the deportation to Babylon took place.
After the deportation to Babylon: Jechoniah fathered Shealtiel, Shealtiel fathered Zerubbabel, Zerubbabel fathered Abiud, Abiud fathered Eliakim, Eliakim fathered Azor, Azor fathered Zadok, Zadok fathered Achim, Achim fathered Eliud, Eliud fathered Eleazar, Eleazar fathered Matthan, Matthan fathered Jacob; and Jacob fathered Joseph the husband of Mary; of her was born Jesus who is called Christ.
This is how Jesus Christ came to be born. His mother Mary was betrothed to Joseph; but before they came to live together she was found to be with child through the Holy Spirit. Her husband Joseph, being an upright man and wanting to spare her disgrace, decided to divorce her informally.
He had made up his mind to do this when suddenly the angel of the Lord appeared to him in a dream and said, ‘Joseph son of David, do not be afraid to take Mary home as your wife, because she has conceived what is in her by the Holy Spirit. She will give birth to a son and you must name him Jesus, because he is the one who is to save his people from their sins.’
Now all this took place to fulfil what the Lord had spoken through the prophet: Look! the virgin is with child and will give birth to a son whom they will call Immanuel, a name which means ‘God-is-with-us’.

3) Reflection
• Today, September 8th, Feast of the Nativity of Our Lady, the Gospel gives us the genealogy or Identity Card of Jesus. By means of the list of his ancestors, the Evangelist tells the communities who Jesus is and how God acts in a surprising way in order to fulfil his promise. On our identity card there is our name and the name of our parents. Some persons, to say who they are, also recall the names of the grandparents. Others, are embarrassed of their ancestors, of their families, and hide behind appearances which deceive. The Identity Card of Jesus has many names. On the list of names there is a great novelty. At that time, the genealogy indicated only the name of the men. This is why, it surprises that Matthew also mentions five women among the ancestors of Jesus: Tamar, Rahab, Ruth, la wife of Uriah and Mary. Why does he choose precisely these five women and not others? This is the question which the Gospel of Matthew leaves for us.
• Matthew 1, 1-17: The long list of names – the beginning and the end of the genealogy. At the beginning and at the end of the genealogy, Matthew clearly makes us understand which is the identity of Jesus: He is the Messiah, son of David and son of Abraham. As descendant of David, Jesus is the response of God to the expectations of the Jewish people (2 S 7, 12, and 16). As descendant of Abraham, he is source of blessings and of hope for all nations of the earth (Gn 12, 13). Therefore, in this way, both the Jews and the Pagans who formed part of the communities of Syria and of Palestine at the time of Matthew could see that their hope was fulfilled in Jesus. .
Drawing up the list of the ancestors of Jesus, Matthew adopts a plan of 3 X 14 generations (Mt 1, 17). Number two is the number of the divinity. Number 14 is two times 7, which is the number of perfection. At that time, it was something common to interpret or calculate God’s action by using the numbers and the dates. By means of these symbolical calculations, Matthew reveals the presence of God throughout the generations and expresses the conviction of the communities who said that Jesus appeared at the time established by God. With his coming history reaches its fulfilment.
The message of the five women mentioned in the genealogy. Jesus is the response of God to the expectation both of the Jews and of the Pagans, but it is in a completely surprising way. In the stories of the four women of the Old Testament, mentioned in the genealogy, there is something abnormal. The four of them were foreigners, and they will conceive their sons outside the normal schema of the behaviour of that time and they do not keep the requirements of the laws of purity of the time of Jesus. Tamar, a Canaanite, widow, dresses as a prostitute of Jericho to oblige Judah to be faithful to her and to give her a son (Gn 38, 1-30). Rahab, a prostitute from Jericho, makes an alliance with the Israelites. She helped them to enter into the Promised Land and professed the faith in a God who liberates from the Exodus. (Gs 2, 1-21). Bathsheba, a Hittite, wife of Uriah, was seduced, abused and made pregnant by King David, who in addition to that, ordered her husband to be killed (2 S 11, 1-27). Ruth, a Moabite, a poor widow, chose to remain with Naomi and adhere to the people of God (Rt 1, 16-18). Advised by her mother-in-law Naomi, Ruth imitates Tamar and spends the night together with Boaz, obliging him to observe the law and to give her a son. From their relation Obed was born, the grandfather of King David (Rt 3, 1-15; 4, 13-17). These four women question the models of behaviour imposed by the Patriarchal society. And thus, their conventional initiative will give continuity to the descendants of Jesus and will bring salvation to all the people. Through them, God realizes his plan and sends the promised Messiah. Truly, God’s way of acting surprises and makes one think! At the end the reader will ask: “And Mary? Is there something irregular in her? What is it? We get the response from the story of Saint Joseph which follows in (Mt 1, 18-23).
• Mathew 1, 18-23: Saint Joseph was just. What was irregular in Mary is that she became pregnant before living together with Joseph, her promised spouse, who was a just man. Jesus says: “If your justice is not greater than the justice of the Pharisees and the Scribes, you will not enter the Kingdom of Heaven”. If Joseph had been just according to the justice of the Pharisees, he should have denounced Mary and she would have been stoned. Jesus would have died. Thanks to the true justice of Joseph, Jesus was able to be born.

4) Personal questions
• When I present myself to others, what do I say about myself and about my family?
• If the Evangelist mentions only these five women together with over forty men, no doubt, he wants to communicate a message, which is this message? What does all this tell us about the identity of Jesus? And what does this say about us?