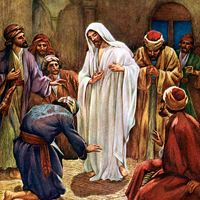 2) Gospel Reading - Matthew 24,42-51
Jesus said to his disciples: 'So stay awake, because you do not know the day when your master is coming. You may be quite sure of this, that if the householder had known at what time of the night the burglar would come, he would have stayed awake and would not have allowed anyone to break through the wall of his house. Therefore, you too must stand ready because the Son of man is coming at an hour you do not expect.
'Who, then, is the wise and trustworthy servant whom the master placed over his household to give them their food at the proper time? Blessed that servant if his master's arrival finds him doing exactly that. In truth I tell you, he will put him in charge of everything he owns. But if the servant is dishonest and says to himself, "My master is taking his time," and sets about beating his fellow-servants and eating and drinking with drunkards, his master will come on a day he does not expect and at an hour he does not know. The master will cut him off and send him to the same fate as the hypocrites, where there will be weeping and grinding of teeth.'


3) Reflection
• The Gospel today speaks about the coming of the Lord at the end of time and exhorts us to be watchful, to watch. At the time of the first Christians, many persons thought that the end of this world was close at hand and that Jesus would have returned afterwards. Today many persons think that the end of the world is close at hand. And therefore, it is well to reflect on the meaning of vigilance, of watching.
• Matthew 24, 42: Watch. “So stay awake! Watch, because you do not know the day when your master is coming”. Concerning the day and the hour of the end of the world, Jesus had said: “But as for that day or hour, nobody knows it, neither the angels in heaven, nor the Son, no one but the Father!" (Mk 13, 32). Today, many people live concerned thinking about the end of the world. Have you seen when walking through the streets of the city that it is written on the walls: “Jesus will return!” And how will this coming be? After the year 1000, basing themselves on the Gospel of John, people began to say (Rev 20, 7): “1000 years have gone by, but 2000 will not pas by!” This is why, as the year 2000 approached, many were worried. There were even some people who were anguished because of the proximity of the end of the world, so much so that they committed suicide. Others, reading the Apocalypse of John, even were able to foretell the exact hour of the end. But the year 2000 came and nothing happened. The end of the world does not arrive! Many times, the affirmation “Jesus will return” is used to frighten people and oblige them to belong to a given church! Others, because they have waited so long and have speculated so much concerning the coming of Jesus, are not aware of his presence among us, in the most common things of life, in the facts of every day.
• The same problems existed in the Christian communities of the first centuries. Many persons of the communities said that the end of this world was close at hand and that Jesus would have returned. Some of the community of Thessalonica in Greece, basing themselves on the preaching of Paul said: “Jesus will return!” (1 Th 4, 13-18; 2 Th 2, 2). And this is why, there were even persons who no longer worked because they thought that the coming of the end was so close at hand, within a few days or a few weeks so, “Why work, if Jesus will return afterwards?” (cf. 2 Th 3, 11). Paul responds that it was not so simple as they imagined. And to those who had stopped working he would say: “Anyone who does not want to work, has no right to eat!” Others remained looking up at the sky, waiting for the return of Jesus in the clouds (cf. Ac 1, 11). Others rebelled because he delayed coming back (2 P 3, 4-9). In general the Christians lived with the expectation of the imminent coming of Jesus. Jesus was coming to realize or carry out the Final Judgement to end with the unjust history of this world and to inaugurate the new phase of history, the definitive phase of the New Heaven and the New Earth. They believed that this would have taken place within one or two generations. Many persons would still be alive when Jesus would have appeared again, glorious in Heaven (1Th 4, 16-17; Mc 9, 1). Others, tired of waiting would say: “He will never come back!” (2 P 3,).
• Up until now the coming of Jesus has not arrived! How can this delay be understood? It is because they are not aware that Jesus has already returned and lives in our midst: “I am with you always, till the end of time.” (Mt 28, 20). He is already at our side, in the struggle for justice, for peace, for life. The fullness has not as yet been attained, but a guarantee of the Kingdom is already in our midst. This is why, we expect with a firm hope the full liberation of humanity and of nature (Rm 8, 22-25). And while we wait and struggle, we say with certainty: “He is already in our midst” (Mt 25, 40).
• Matthew 24, 43-51: The example of the householder and of his servants. “Consider this: if the householder had known at what time of the night the burglar would come, he would have stayed awake and would not have allowed anyone to break through the wall of his house.” Jesus says this very clearly. Nobody knows anything regarding the hour: "Concerning this day and this hour, nobody knows anything, neither the angels, or the Son, but only the Father
What is important is not to know the hour of the end of this world, but rather to be capable to perceive the coming of Jesus who is already present in our midst in the person of the poor (cf. Mt 25, 40) and in so many other ways and events of our daily life. What is important is to open the eyes and to keep in mind the commitment of the good servant of whom Jesus speaks about in the parable.

5) Concluding Prayer
Day after day I shall bless you, Lord,
I shall praise your name for ever and ever.
Great is Yahweh and worthy of all praise,
his greatness beyond all reckoning. (Ps 145,2-3)