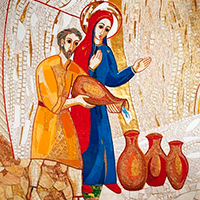 2) Gospel Reading - Matthew 22,1-14
Jesus began to speak to them in parables once again, 'The kingdom of Heaven may be compared to a king who gave a feast for his son's wedding. He sent his servants to call those who had been invited, but they would not come. Next he sent some more servants with the words, "Tell those who have been invited: Look, my banquet is all prepared, my oxen and fattened cattle have been slaughtered, everything is ready. Come to the wedding." But they were not interested: one went off to his farm, another to his business, and the rest seized his servants, maltreated them and killed them. The king was furious. He despatched his troops, destroyed those murderers and burnt their town. Then he said to his servants, "The wedding is ready; but as those who were invited proved to be unworthy, go to the main crossroads and invite everyone you can find to come to the wedding."
So these servants went out onto the roads and collected together everyone they could find, bad and good alike; and the wedding hall was filled with guests. When the king came in to look at the guests he noticed one man who was not wearing a wedding garment, and said to him, "How did you get in here, my friend, without a wedding garment?" And the man was silent. Then the king said to the attendants, "Bind him hand and foot and throw him into the darkness outside, where there will be weeping and grinding of teeth."
For many are invited but not all are chosen.'

4) Personal questions
• Who are the persons who are normally invited to our feasts? Why? Who are the persons who are not invited to our feasts? Why?
• Which are the reasons which today prevent many persons from participation in society and in the Churchy? Which are some of the reasons that persons give to exclude themselves from the duty to participate in the community? Are those reasons just?

5) Concluding Prayer
Do not thrust me away from your presence,
do not take away from me your spirit of holiness.
Give me back the joy of your salvation,
sustain in me a generous spirit. (Ps 51,11-12)