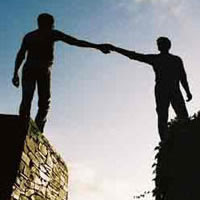 Then Peter went up to Jesus and said, 'Lord, how often must I forgive my brother if he wrongs me? As often as seven times?'
Jesus answered, 'Not seven, I tell you, but seventy-seven times.
'And so the kingdom of Heaven may be compared to a king who decided to settle his accounts with his servants. When the reckoning began, they brought him a man who owed ten thousand talents; he had no means of paying, so his master gave orders that he should be sold, together with his wife and children and all his possessions, to meet the debt. At this, the servant threw himself down at his master's feet, with the words, "Be patient with me and I will pay the whole sum." And the servant's master felt so sorry for him that he let him go and cancelled the debt.
Now as this servant went out, he happened to meet a fellow-servant who owed him one hundred denarii; and he seized him by the throat and began to throttle him, saying, "Pay what you owe me." His fellow-servant fell at his feet and appealed to him, saying, "Be patient with me and I will pay you." But the other would not agree; on the contrary, he had him thrown into prison till he should pay the debt.
His fellow-servants were deeply distressed when they saw what had happened, and they went to their master and reported the whole affair to him.
Then the master sent for the man and said to him, "You wicked servant, I cancelled all that debt of yours when you appealed to me. Were you not bound, then, to have pity on your fellow-servant just as I had pity on you?" And in his anger the master handed him over to the torturers till he should pay all his debt. And that is how my heavenly Father will deal with you unless you each forgive your brother from your heart.'
Jesus had now finished what he wanted to say, and he left Galilee and came into the territory of Judea on the far side of the Jordan.


3) Reflection
• In yesterday’s Gospel we have heard the words of Jesus concerning fraternal correction (Mt 18, 15-20). In the Gospel today (Mt 19, 21-39) the central theme is pardon and reconciliation.
• Matthew 18, 21-22: Forgive seventy times seven! Before the words of Jesus on fraternal correction and reconciliation, Peter asks: “How often must I forgive? Seven times?” Seven is a number which indicates perfection and, in the case of the proposal of Peter, seven is synonymous of always. But Jesus goes beyond. He eliminates all and whatever possible limitation there may be to pardon: “Not seven I tell you, but seventy-seven times”. It is as if he would say “Always, N0! Peter. But seventy times seven always!”. And this because there is no proportion between God’s love for us and our love for our brother. Here we recall the episode of the Old Testament of Lamech: “Lamech says to his wives, Adah and Zollah, hear my voice; listen to what I say: I killed a man for wounding me, a boy for striking me. Sevenfold vengeance for Cain, but seventy-sevenfold for Lamech” (Gn 4, 23-24). The task of the communities is to invert the process of the spiral of violence. In order to clarify his response to Peter, Jesus tells them the parable of pardon without limits.
• Matthew 18, 23-27: The attitude of the master. This parable is an allegory, that is, Jesus speaks about a master, but thinks of God. This explains the enormous contrasts of the parable. As we will see, in spite that it is a question of daily ordinary things, there is something in this story which does not take place in daily life. In the story which Jesus tells, the master follows the norms of the law or rights of that time. It was his right to take a labourer with all his family and to keep him in prison until he would have paid his debt carrying out his work as a slave. But before the request of the debtor servant, the master forgives the debt. What strikes us is the amount: ten thousand talents! One talent was equal to 35 kg, and so according to the estimate made, ten thousand talents were equal to 350 tons of gold. Even if the debtor and his family would have worked their whole life, they would never have been capable to earn 350 tons of gold. The extreme estimate is made on purpose. Our debt before God is countless and unpayable!
• Matthew 18, 28-31: The attitude of the labourer. As soon as he went out, that servant found a fellow servant as himself who owned him one hundred denarii and, he seized him by the throat and began to throttle him saying: Pay what you owe! This servant owed him one hundred denarii; that is the salary of one hundred days of work. Some have estimated that it was a question of 30 grams of gold. There was no comparison between the two! But this makes us understand the attitude of the labourer: God forgives him 350 tons of gold and he is not capable to forgive 30 grams of gold. Instead of forgiving, he does to the companion what the master could have done with him, but did not do it. He puts in prison his companion according to the norms of the law until he would have paid his debt. This is an inhuman attitude, which also strikes the other companions. Seeing what had happened, the other servants were sad and went to refer to their master everything which had happened. We also would have done the same; we would also have had the same attitude of disapproval.
• Matthew 18, 32-35: The attitude of God “Then the master called that man and said to him: “You wicked servant! I have forgiven you all your debt because you appealed to me. Were you not bound then to have pity on your fellow-servant just as I had pity on you? And, angry, the master handed him over to the torturers till he should pay all his debt“. Before God’s love who pardons gratuitously our debt of 350 tons of gold, it is more than fair, than just that we should forgive our brother who has a small debt of 30 grams of gold. God’s forgiveness is without any limit. The only limit for the gratuity of God’s mercy comes from ourselves, from our incapacity to forgive our brothers! (Mt 18, 34). This is what we say and ask for in the Our Father: “Forgive us our offences as we forgive those who offend us” (Mt 6, 12-15).
The community: an alternative space of solidarity and fraternity. The society of the Roman Empire was hard and heartless, without any space for the little ones. They sought some refuge for the heart and did not find it. The Synagogues were very demanding and did not offer a place for them. In the Christian communitie4s, the rigour of some concerning the observance of the Law in the daily life followed the same criteria as society and as the Synagogue. Thus, in the communities, the same divisions which existed in society and in the Synagogue, between rich and poor, dominion and submission, man and woman, race and religion, began to appear. The community instead of being a place of acceptance became a place of condemnation. By uniting the words of Jesus, Matthew wants to enlighten the journey of the followers of Jesus, in order that the communities may be an alternative place of solidarity and of fraternity. They should be Good News for the poor.

5) Concluding Prayer
From the rising of the sun to its setting,
praised be the name of Yahweh!
Supreme over all nations is Yahweh,
supreme over the heavens his glory. (Ps 113,3-4)