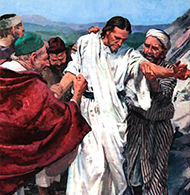 2) Gospel Reading - Matthew 17,22-27
When they were together in Galilee, Jesus said to them, 'The Son of man is going to be delivered into the power of men; they will put him to death, and on the third day he will be raised up again.' And a great sadness came over them.
When they reached Capernaum, the collectors of the half-shekel came to Peter and said, 'Does your master not pay the half-shekel?' 'Yes,' he replied, and went into the house. But before he could speak, Jesus said, 'Simon, what is your opinion? From whom do earthly kings take toll or tribute? From their sons or from foreigners?' And when he replied, 'From foreigners,' Jesus said, 'Well then, the sons are exempt. However, so that we shall not be the downfall of others, go to the lake and cast a hook; take the first fish that rises, open its mouth and there you will find a shekel; take it and give it to them for me and for yourself.'


3) Reflection
• The five verses of today’s Gospel speak about two very different themes between them. (a) The second announcement of the passion, death and resurrection of Jesus (Mt 17, 22-23); (b) they inform on the conversation of Jesus with Peter about paying the taxes and the dues to the temple (Mt 17, 24-27).
• Matthew 17, 22-23: The announcement of the death and resurrection of Jesus. The first announcement (Mt 16, 21) had produced a strong reaction on Peter who did not want to know anything about suffering nor the cross. Jesus had answered just as strongly: “Get behind me, Satan!” (Mt 16, 23). Here, in the second announcement, the reaction of the disciples is less strong, less aggressive. The announcement produces sadness. It seems that now they begin to understand that the cross forms part of the journey. The proximity of the death and the suffering weigh heavily on them, giving rise to a great discouragement. Even if Jesus tries to help them, the resistance of centuries against the idea of a crucified Messiah, was much greater.
• Matthew 17 24-25a: The question which the tax collectors ask Peter concerning the taxes. When they reached Capernaum, the tax collector of the taxes of the Temple asks Peter: “Does your Master not pay the half-shekel for the Temple?” Peter answered: “Yes”. From the time of Nehemias (V Century BC), the Jews who had returned from the exile of Babylonia, committed themselves solemnly in the Assembly to pay the diverse taxes and dues in order to allow the Temple to continue to function and to take care of the maintenance both of the priestly service and of the building of the Temple. (Ne 10, 33-40). From what we can see from Peter’s response, Jesus paid the taxes like any other Jew.
• Matthew 17, 25b-26: The question of Jesus to Peter concerning the taxes. The conversation between Jesus and Peter is very strange. When they reach home, Jesus asked: “ Simon, what is your opinion? From whom do earthly kings take toll or tribute? From their sons or from foreigners?” Peter responds: “From foreigners”. And Jesus says: “Therefore, the sons are exempt!” Probably, here we can see a discussion between the Christian Jews before the destruction of the Temple, in the year 70. They asked themselves if they had to continue or not to pay the taxes of the Temple, as they did before. By Jesus’ response they discover that they are not obliged to pay this tax: “The sons are exempt!” The sons are the Christians, but even if they are not obliged to pay, the recommendation of Jesus is to pay in order not to cause scandal.
• Matthew 17, 27: The conclusion of the conversation on the paying of the tax. The solution which Jesus gives to this situation is even stranger. He tells Peter: “However, so that we shall not be the downfall of others, go to the lake and cast a hook: take the first fish that rises, open its mouth and there you will find a shekel; take it and give it to them for me and for yourself.” This was a strange miracle, strange like that of the 2000 pigs which threw themselves into the sea (Mk 5, 13). Which ever is the interpretation of this miraculous fact, this way of resolving the problem suggests that it is a question that is not too important for Jesus.

4) Personal questions
• The suffering of the Cross discourages and saddens the disciples. Has this already happened in your life?
• How do you interpret the episode of the coin found in the mouth of the fish?