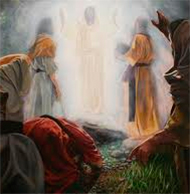 Lord Jesus, send your Spirit to help us to read the Scriptures with the same mind that you read them to the disciples on the way to Emmaus. In the light of the Word, written in the Bible, you helped them to discover the presence of God in the disturbing events of your sentence and death. Thus, the cross that seemed to be the end of all hope became for them the source of life and of resurrection.
Create in us silence so that we may listen to your voice in Creation and in the Scriptures, in events and in people, above all in the poor and suffering. May your word guide us so that we too, like the two disciples from Emmaus, may experience the force of your resurrection and witness to others that you are alive in our midst as source of fraternity, justice and peace. We ask this of you, Jesus, son of Mary, who revealed to us the Father and sent us your Spirit. Amen.

2. Reading
a) A key to the reading:
On this Solemnity, the Church meditates on the Transfiguration of Jesus in the presence of the three disciples who joined him on the mountain. The Transfiguration takes place after the first announcement of the death of Jesus (Lk 9:21-22). This announcement had confused the disciples and especially Peter. When we take a close look at the small details, we see that the text describes the transfiguration in a way that makes us aware of how this unusual experience of Jesus was able to help the disciples overcome the crisis in which they found themselves. As we read, let us try to pay attention to the following: "How did the transfiguration take place and what was the reaction of the disciples towards this experience?"
Mark 9:2-10b) A division of the text to help our reading:
Mark 9:2-4: The Transfiguration of Jesus in the presence of his disciples
Mark 9:5-6: Peter’s reaction to the transfiguration
Mark 9:7-8: The voice from heaven that explains the meaning of the Transfiguration
Mark 9:9-10: Keeping secret what they had seen
c) Text:
2 Six days later, Jesus took with him Peter and James and John and led them up a high mountain on their own by themselves. There in their presence he was transfigured: 3 his clothes became brilliantly white, whiter than any earthly bleacher could make them. 4 Elijah appeared to them with Moses; and they were talking to Jesus. 5 Then Peter spoke to Jesus, 'Rabbi,' he said, 'it is wonderful for us to be here; so let us make three shelters, one for you, one for Moses and one for Elijah.' 6 He did not know what to say; they were so frightened. 7 And a cloud came, covering them in shadow; and from the cloud there came a voice, 'This is my Son, the Beloved. Listen to him.' 8 Then suddenly, when they looked round, they saw no one with them any more but only Jesus. 9 As they were coming down from the mountain he warned them to tell no one what they had seen, until after the Son of man had risen from the dead. 10 They observed the warning faithfully, though among themselves they discussed what 'rising from the dead' could mean.

4. Some questions
to help us in our personal reflection.
a) Which part of the text did you like most or that touched you most? Why?
b) How does the transfiguration take place and what is the reaction of the disciples to this experience?
c) Why does the text present Jesus with brilliant clothes while he is speaking with Moses and Elijah? Who are Moses and Elijah for Jesus? Who are they for the disciples?
d) What is the message of the voice from heaven for Jesus? And what is the message for the disciples?
e) How can we transfigure, today, our personal and family life and the life of the community in our area?

6. The prayer of a Psalm: Psalm 27 (26)
The Lord is my light
Yahweh is my light and my salvation,
whom should I fear?
Yahweh is the fortress of my life,
whom should I dread?
When the wicked advance against me to eat me up,
they, my opponents, my enemies,
are the ones who stumble and fall.

One thing I ask of Yahweh,
one thing I seek:
to dwell in Yahweh's house all the days of my life,
to enjoy the sweetness of Yahweh,
to seek out his temple.

For he hides me away under his roof on the day of evil,
he folds me in the recesses of his tent,
sets me high on a rock.
Now my head is held high above the enemies who surround me;
in his tent I will offer sacrifices of acclaim. I will sing,
I will make music for Yahweh.

Yahweh, hear my voice as I cry,
pity me, answer me!
Of you my heart has said,
'Seek his face!'
Your face, Yahweh, I seek;
do not turn away from me.
Do not thrust aside your servant in anger,
without you I am helpless.
Never leave me, never forsake me,
God, my Saviour.
Though my father and mother forsake me,
Yahweh will gather me up.

Yahweh, teach me your way,
lead me on the path of integrity because of my enemies;
do not abandon me to the will of my foes
- false witnesses have risen against me,
and are breathing out violence.