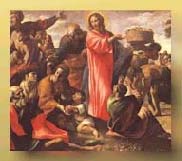 2) Gospel Reading - Matthew 14,13-21
When Jesus received this news of John beheading, he withdrew by boat to a lonely place where they could be by themselves. But the crowds heard of this and, leaving the towns, went after him on foot. So as he stepped ashore he saw a large crowd; and he took pity on them and healed their sick.
When evening came, the disciples went to him and said, 'This is a lonely place, and time has slipped by; so send the people away, and they can go to the villages to buy themselves some food.' Jesus replied, 'There is no need for them to go: give them something to eat yourselves.' But they answered, 'All we have with us is five loaves and two fish.' So he said, 'Bring them here to me.'
He gave orders that the people were to sit down on the grass; then he took the five loaves and the two fish, raised his eyes to heaven and said the blessing. And breaking the loaves he handed them to his disciples, who gave them to the crowds.
They all ate as much as they wanted, and they collected the scraps left over, twelve baskets full. Now about five thousand men had eaten, to say nothing of women and children.

3) Reflection
• Context. Chapter 14 of Matthew which contains the account of the multiplication of the loaves, proposes an itinerary that guides the reader in a progressive discovery of faith in Jesus: from the lack of faith on the part of his fellow countrymen to the acknowledgment of the Son of God, passing through the gift of bread. The fellow citizens of Jesus marvelled at his wisdom but do not understand that this is what acts behind his works. Besides, having a direct knowledge of Jesus’ family, of his mother, of his brothers, and of his sisters, they only succeed in seeing in him his human condition alone: he is the son of the carpenter. Not being understood in his own home town, from now on, Jesus will live in the midst of his people, to whom he will give all his attention and his solidarity. Healing and feeding the crowds.
• The dynamic of the account. Matthew has carefully narrated the episode of the multiplication of the loaves. The episode is enclosed between two expressions of transition in which he tells us that Jesus withdrew “separated himself” from the crowds, from the disciples, from the boat (vv.13-14; vv. 22-23). Verse 13 does not only serve as transition but offers us the reason why Jesus went to a desert place. Such a device serves to create the environment in which the miracle takes place. The evangelist concentrates the account on the crowd and on the attitude of Jesus in regard to the crowd.
• Jesus was moved deeply to pity. At the moment when Jesus arrives he finds himself before a crowd awaiting him; in seeing the crowd he took pity on them and healed their sick. This is a “tired and depressed crowd for they were like sheep without a shepherd” (9, 36; 20, 34). The verb that expresses the compassion of Jesus is really meaningful: “Jesus’ heart was broken”; and this corresponds to the Hebrew verb that expresses the maternal visceral love. This is the same sentiment experienced by Jesus before the tomb of Lazarus (Jn 11, 38). Compassion is the subjective aspect of the experience of Jesus that becomes effective with the gift of the bread.
• The gift of the bread. The account of the multiplication of the loaves is opened with the expression, “when evening came” (v.15) that will introduce the account of the Last Supper (Mt 26, 20) and also that of the burial of Jesus (Mt 27, 57). In the evening, then, Jesus invites the Apostles to feed the crowd. In the middle of the desert, far away from the villages and from the cities, Jesus and the disciples find themselves before a very big human problem; to feed that the big crowd that follows Jesus. But they cannot take care of this task to provide for the material needs of the crowd without the power of Jesus. Their immediate response is that of sending the crowd back home. In the face of human limitations Jesus intervenes and works the miracle satisfying the hunger of all the people who follow him. To feed the crowd is the response of Jesus, from his heart which breaks in the face of a very concrete human need. The gift of the bread is not only sufficient to satisfy the crowd but it is so superabundant that it becomes necessary to gather what was left over. In v. 19b we can see that Matthew gave a Eucharistic significance to the episode of the multiplication of the loaves: “he raised his eyes to heaven and said the blessing, and breaking the loaves he handed them to his disciples”; the role of the disciples is also made evident in their function of mediation between Jesus and the crowd: “and the disciples distributed to the crowd” (v.19c). The gestures that accompany the miracle are identical to those that Jesus will fulfil later on the “night when he was betrayed”: he raised his eyes, blessed the bread and breaks it. From here comes the symbolical value of the miracle: it can be considered an anticipation of the Eucharist. Besides, on the part of Jesus, feeding the crowds is “a sign” that he is the Messiah and that he prepares a banquet of joy for the whole humanity. The disciples learn from Jesus, who distributes the bread to them, the value of sharing. A symbolical gesture that contains a real fact that goes beyond the episode itself and is projected on the future: in our daily Eucharistic celebration, where we relive that gesture of the broken bread, it is necessary that it be multiplied throughout the whole day.

4) Personal questions
• Do you try to fulfil gestures of solidarity toward those who are close to you or who share close to you the journey of life? In the face of very concrete problems of your friends or relatives, do you know how to offer your help and your availability to collaborate to find a solution?
• Before breaking the bread, Jesus raised his eyes to heaven: do you know how to thank the Lord for the daily gift of bread? Do you know how to share your goods with others, especially with the poorest?

5) Concluding Prayer
Keep me far from the way of deceit,
grant me the grace of your Law.
Do not deprive me of that faithful word,
since my hope lies in your judgements. (Ps 119,29.43)