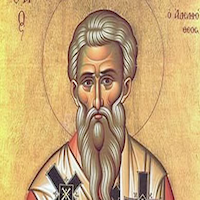 Born Jewish, he became an adult convert to Christianity. Hegesippus lived twenty years in Rome, Italy where he researched the early Church, but in later years he retired to Jerusalem. He was the first to trace and record the succession of the bishops of Rome from Saint Peter to his own day, and is considered the father of ecclesiastical history. Little of his writings survive, but he was highly recommended by other early writers including Eusebius and Saint Jerome. Compiled a catalogue of heresies during the first century of Christianity.