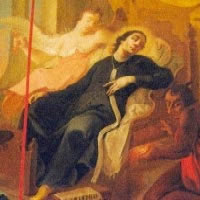 Born to the Gallic upper class. Educated at the cathedral school of Saint Germain. Priest. Canon at the church of Saint Genevieve in Paris, France until c.1170. Widespread reputation for holiness and austerity; his life was so austere that his brother priests harassed him into leaving the city. When Pope Eugene III implemented stricter discipline in 1148, William returned and became sub-prior.

When there was a need for some one to help reform the discipline and liturgical devotion of the Danish monasteries, the bishop sent William. While working at Eskilsoe, he became its abbot, and stayed for 30 years. Faced opposition from lax brothers and local nobles, but never flinched. Founded the abbey of Saint Thomas in Aebelholt, Zeeland. His extensive correspondence has survived, and is a valued source for Danish history of the period.