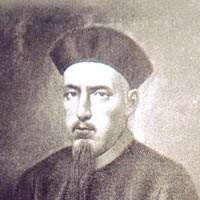 Born  January 6, 1814 at La Rochelle-Normande, France. Youngest of nine children born to Nicolas Chapdelaine and Madeleine Dodeman. Following grammar school, Auguste dropped out to work on the family farm. He early felt a call to the priesthood, but his family opposed it, needing his help on the farm. However, the sudden death of two of his brothers caused them to re-think forcing him to ignore his life’s vocation, and they finally approved. He entered the minor seminary at Mortain on  October 1, 1834, studying with boys half his age. It led to his being nicknamed Papa Chapdelaine, which stuck with him the rest of his life.

Ordained on  June 10, 1843 at age 29. Associate pastor from 1844 to 1851. He finally obtained permission from his bishop to enter the foreign missions, and was accepted by French Foreign Missions; he was two years past their age limit, but his zeal for the missions made them approve him anyway. He stayed long enough to say a final Mass, bury his sister, and say good-bye to his family, warning them that he would never see them again. Left Paris, France for the Chinese missions on 30 April 1852, landing in Singapore on  September 5, 1852.

Due to being robbed on the road by bandits, Auguste lost everything he had, and had to fall back and regroup before making his way to his missionary assignment. He reached Kwang-si province in 1854, and was arrested in Su-Lik-Hien ten days later. He spent two to three weeks in prison, but was released, and ministered to the locals for two years, converting hundreds. Arrested on 26 February 1856 during a government crackdown, he was returned to Su-Lik-Hien and sentenced to death for his work. Tortured with and died with Saint Lawrence Pe-Man and Saint Agnes Tsau Kouy. One of the Martyrs of China