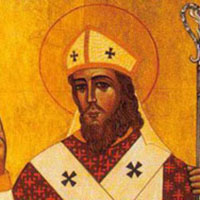 Deacon. Trusted aide to Pope Saint Leo the Great. Papal legate. Sent to “Robber Synod” at Ephesus in 449 to report on the Monophysitism heresies of Eutyches, which denied the humanity of Christ and claimed that He had only a divine nature, a teaching condemned in 451 by the Council of Chalcedon. Eutyches’ followers attacked the legate party, and forced them to return to Rome. Arch-deacon c.455. Worked on an updated method of calculating the date of Easter. Chosen 46th pope in 461.

As pope, Hilary confirmed the work of several general councils, rebuilt and remodeled many churches, fought Nestorianism and Arianism, and held several Councils at Rome. Renowned for defending the rights of his bishops while exhorting them to curb their excesses and devote themselves more completely to God. Helped define the Church‘s role in the empire, and affirmed the position of the pope, and not the emperor, as leader in spiritual matters. He continued Leo I‘s vigorous policy, strengthening ecclesiastical government in Gaul and Spain. Erected churches, convents, libraries, and two public baths, and his synod of 465 is the earliest Roman synod whose records are extant.