Source: The Lives of the Fathers, Martyrs, and Saints by Alban Butler 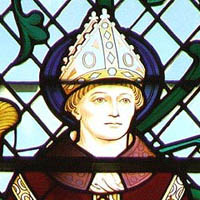 Roman Martyrology:  King of Northumbria from 634 until his death, and is venerated as a saint, of which there was a particular cult in the Middle Ages.

Oswald was of a noble Saxon family, and was endowed with a very rare and beautiful form of body and with a singular piety of soul. He was brought up by his uncle, St. Odo, Archbishop of Canterbury, and was chosen, while still young, dean of the secular canons of Winchester, then very relaxed. His attempt to reform them was a failure; and he saw, with that infallible instinct which so often guides the Saints in critical times, that the true remedy for the corruptions of the clergy was the restoration of the monastic life. He therefore went to France and took the habit of St. Benedict, but returned, only to receive the news of Odo's death.

He found, however, a new patron in St. Dunstan, now metropolitan, through whose influence he was nominated to the see of Worcester. To these two Saints, together with Ethelwold of Winchester, the monastic revival of the tenth century is mainly due. Oswald's first care was to deprive of their benefices the disorderly clerics, whom he replaced as far as possible by regulars, and himself founded seven religious houses. Considering that in the hearts of the secular canons there were yet some sparks of virtue, he would not at once expel them, but rather entrapped them by a holy artifice. Adjoining the cathedral he built a church in honor of the Mother of God, causing it to be served by a body of strict religious. He himself assisted at the Divine Office in this church, and the people followed his example.

The canons, finding themselves isolated and their cathedral deserted, chose rather to embrace the religious life than to continue not only to injure their own souls, but to be a mockery to their people by reason of the contrast offered by their worldliness to the regularity of their religious brethren. As Archbishop of York a like success attended St. Oswald's efforts; and God manifested His approval of his zeal by discovering to him the relics of his great predecessor, St. Wilfrid, which he reverently translated to Worcester. He died February 29, 992.

Reflection: A soul without discipline is like a ship without a helm; she must inevitably strike unawares upon the rocks, founder on the shoals, or float unknowingly into the harbor of the enemy.