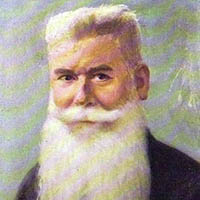 Roman martyrology: At France, Daniel Jules Alexis Brottier, C.S.Sp., was a French Roman Catholic priest in the Congregation of the Holy Spirit.

Daniel spent most of his life in the trenches—one way or another.
Born in France in 1876, Daniel was ordained in 1899 and began a teaching career. That didn’t satisfy him long. He wanted to use his zeal for the gospel far beyond the classroom. He joined the missionary Congregation of the Holy Spirit, which sent him to Senegal, West Africa. After eight years there, his health was suffering. He was forced to return to France, where he helped raise funds for the construction of a new cathedral in Senegal.

At the outbreak of World War I Daniel became a volunteer chaplain and spent four years at the front. He did not shrink from his duties. Indeed, he risked his life time and again in ministering to the suffering and dying. It was miraculous that he did not suffer a single wound during his 52 months in the heart of battle.

After the war he was invited to help establish a project for orphaned and abandoned children in a Paris suburb. He spent the final 13 years of his life there. He died in 1936 and was beatified by Pope John Paul II in Paris only 48 years later.