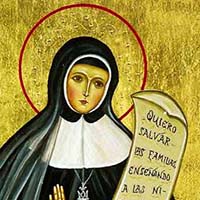 Roman Martyrology: At Olesa de Montserrat in the district of Barcelona in Spain, Saint Paula Montal Fornés De San José De Calasanz, virgin, who founded the Congregation of the Daughters of Mary, Sisters of the Pious Schools.

Daughter of Ramon and Vicenta Fornes Montal. Raised in a large and pious family in a small seaside village. Her father died when Paula was 10 years old. She worked as a seamstress and lace-maker, and helped raise her siblings, then helped in her parish to care for other children.

At age thirty, still single and devoting herself privately to God, she and her friend Inez Busquets opened a school in Gerona to provide a good education mixed with spiritual guidance. The school was such a success that she was able to found a college in May 1842, and another school in 1846. To staff and manage the schools, she founded the Daughters of Mary (Pious School Sisters; Escolapias) on 2 February 1847, and took the name Paula of Saint Joseph of Calasanz. Paula served as the leader of the congregation, and they received approval from Pope Blessed Pius IX in 1860. These schools have now spread to four continents.