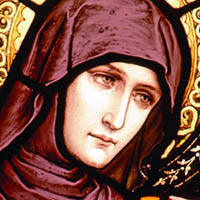 Roman Martyrology: At Tuscany, Saint Margaret, who, deeply moved by the death of her lover, cleansed herself of the stains of her younger life by salutary penance, and, once accepted within the Third Order of Saint Francis, withdrew into a remarkable contemplation of heavenly realities, adorned by God with supernatural graces.

Canonization date: By Benedict XIII in 1728.

Margaret was a native of Alviano, in Tuscany. The harshness of a stepmother, and her own indulged propension to vice, cast her headlong into the greatest disorders.

The sight of the carcass of a man, half putrefied, who had been her gallant, struck her with so great a fear of the divine judgments, and with so deep a sense of the treachery of this world, that she in a moment became a perfect penitent. The first thing she did was to throw herself at her father's feet, bathed in tears, to beg his pardon for her contempt of his authority and fatherly admonitions. She spent the days and nights in tears: and to repair the scandal she had given by her crimes, she went to the parish church of Alviano; with a rope about her neck, and there asked public pardon for them. After this she repaired to Cortona, and made her most penitent confession to a father of the Order of St. Francis, who admired the great sentiments of compunction with which she was filled, and prescribed her austerities and practices suitable to her fervor. Her conversion happened in the year 1274, the twenty-“fifth of her age. She was assaulted by violent temptations of various kinds, but courageously overcame them, and after a trial of three years, was admitted to her profession among the penitents of the third Order of St. Francis, in Cortona. The extraordinary austerities with which she punished her criminal flesh soon disfigured her body. To exterior mortification she joined all sorts of humiliations; and the confusion with which she was covered at the sight of her own sins, pushed her on continually to invent many extraordinary means of drawing upon herself all manner of confusion before men.
This model of true penitents, after twenty-three years spent in severe penance, and twenty of them in the religious habit, being worn out by austerities, and consumed by the fire of divine love, died on the  of February 22, in 1297. After the proof of many miracles, Leo X. granted an office in her honor to the city of Cortona, which Urban VIII. extended to the whole Franciscan Order, in 1623, and she was canonized by Benedict XIII. in 1728.”