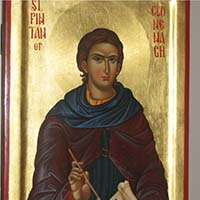 Roman Martyrology: In the monastery called Clúain Ednech in Ireland, Saint Fintan, an abbot, founder of the same monastery, famous for his austerity.

Spiritual student of Saint Columba. Austere hermit at Clonenagh, Ireland. Many would-be students gathered around him that he founded a house for them and served as their abbot. He set such an austere example that neighboring monasteries complained they could not keep up; though he was very severe on himself, Fintan was known to be gentle and forgiving with others. Spiritual teacher of Saint Comgall of Bangor.

Legend says that Fintan’s mother received an angelic visit to explain what a holy son she would have. Fintan was reputed to have the gifts of prophecy and knowledge of distant events. Witnesses say that when he prayed by himself, he was surrounded by light.