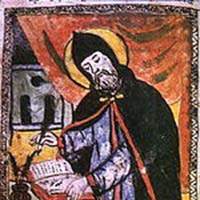 Roman Martyrology: In Armenia, Saint Mesrob, Doctor of the Armenians, who, a pupil of Saint Narsetis and a scribe in the royal palace, having been made a monk, invented the Armenian alphabet, so that the people could be educated in the sacred scriptures. He translated both testaments, and composed some hymns and other songs in the Armenian language.

The creator of the Armenian alphabet was born in the village of Hatseg, located in the region of present-day Mush.  He was the son of a com­moner named Vartan who was a client of the Mamigonian clan.  As a youth Mesrob had learned Greek, Persian and Syriac, and had ultimately entered the military.  Because of his gift for languages, he became a secretary in the royal chancellery.

Disenchanted with a secular way of life and being spiritually inclined, Mesrob chose to become a priest.  Soon thereafter, gathering a few pupils around him, he went to the region of Koghtn in modern Nakhichevan to lead a solitary life in the wilderness and preach to the people of that region, who were still not converted to Christianity.  During his mission­ary work, he came to realize the necessity of having a literary tradition in Armenian so that people could understand the Holy Scriptures and the liturgy.

These concerns led St. Mesrob to Catholicos Sahag, who took him to King Vramshabuh.  In audience with the king, the two laid out the need for a literary language.  The king commissioned a certain Vahrij to consult a Bishop Daniel in northern Syria, who, rumor held, possessed an old alphabet invented for the Armenian language.  Vahrij sought the help of a priest named Hapel, who contacted the bishop, acquired the alphabet from him, and brought it back to Armenia.

With the arrival of Hapel, St. Mesrob gathered a number of young pupils to test how well this alphabet could express the Armenian language.  He noticed, however, that Bishop Daniel’s letters were not suitable for the phonetic structure of Armenia.  Thereupon, Mesrob took some of the pupils and set off for the great learning centers of northern Syria, in the expectation of finding a solution for his concern.  While he was in the town of Edessa (modern Urfa), he received a vision from God, which showed him the forms of the letters of the Armenian alphabet.  Mesrob commissioned a scribe named Rufinus to draft the shapes of the letters he had created.  While still abroad, he immediately undertook the translation of the Bible, beginning with the Proverbs of Solomon.

On his return to Armenia, St. Mesrob established schools and devoted the rest of his life to educational and missionary work.  His travels took him to the outlying provinces of Armenia, to Georgia and Caucasian Albania, to the imperial court of Constantinople and to the Greek sector of Armenia.  While in Georgia and Albania, he also created alphabets for the Georgian and Albanian languages.

Besides his work as a teacher and missionary, St. Mesrob was a staunch supporter of orthodoxy.  He successfully wiped out the seeds of heresy from Armenia.  As an administrator of the church, he is said to have held the rank of chorepiscopus (a bishop tending to people living in the countryside).  After St. Sahag’s demise he became the locum tenens in charge of the spiritual affairs of the church.

St. Mesrob outlived St. Sahag by only six months.  He died in 439 and was buried in the village of Oshagan.  His tomb is located in a crypt under the altar of the church of Oshagan and is a site of pilgrimage.  The present church over the crypt is a nineteenth-century structure, replacing an earlier church built in the seventeenth century.  We know from historical sources that a chapel had been built on the crypt soon after the saint’s burial.

In our days, it has become an established tradition among the members of the brotherhood of Holy Etchmiadzin that the doctoral staff (the insignia marking the vartabed, or doctor of the church) is bestowed at the church of Oshagan.