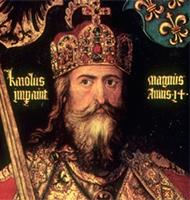 Born on April 2, 742 Aix-la-Chapelle (in modern Germany). Born a prince, the eldest son of Bertha and Pepin the Short, Mayor of the Palace under King Childeric III and then King of the Franks in 751. Married, and father of Louis the Pious. King of the Franks in 768. As "Roman Patrician" Charles was obligated to defend the temporal rights of the Holy See, which were first threatened by the Lombards under Desiderius, whom he finally defeated at Pavia, Italy. Defeated the pagan Saxons, to whom he gave the alternative of baptism or death; their leader Wittekind accepted Christianity in 785. The Song of Roland recounts the death of the paladin Roland during Charlemagne's 777 invasion of Moslem Spain. Crowned the first Holy Roman Emperor, sovereign of Christendom in the West, by Pope Leo III on Christmas Day 800.

The reign of Charlemagne involved a greater degree of organic development and consolidation of Christian Europe than any other person. He supported agricultural development in his realm, organized and codified the principles of ancient Frankish law, and through the scholars whom he attracted to his court, including Saint Alcuin, he inaugurated educational reform. He furthered the spiritual welfare of the Church by his zeal for ecclesiastical discipline and took keen interest in the deliberations of synods. He improved and propagated church music, laying the foundations of modern musical culture. In 806 he divided his empire by will among his three sons.

Charlemagne is the hero of a cycle of romance in the Middle Ages. He first appeared as a legendary figure in the book of the so-called Monachus Sangallensis (883). In France he became the center of the national epics, or "Chansons de Geste," which relate his legendary deeds and those of his paladins (Oliver, Roland, Turpin), and vassals. In the older epics he is the incarnation of majesty, truth, and justice, and the champion of God's church against the infidel, but the later epics paint him as a tyrant and oppressor. His Saxon wars left many legends in Germany, concerned mainly with Wittekind and his conversion, which, according to the French version, was short-lived and insincere. Through French influence the Carlovingian legend spread to other countries; in Italy it inspired the Franco-Italian epics, and the "Reali di Francia" of Mignabotti, and culminated in the famous chivalrous epics of Boiardo and Ariosto; in Germany it appeared in the "Rolandslied" of Konrad der Pfaffe, "Karlmeinet," and the chap-books of the 15th century; in Scandinavia in the "Karlamagnus saga" (c.1300); in the Netherlands in numerous translations like "Carel ende Elegast"; and in England Caxton published "The Lyf of Charles the Grete" (1485) and "The four sonnes of Aymon" (1486).

Died on January 28, 814 at Aachen (in modern Germany) of natural causes.