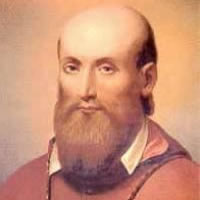 Roman martyrology:  Feast of Saint Francis de Sales, Bishop of Geneva and Doctor of the Church. He founded with St. Jane de Chantal, the Order of the Visitation, and in Lyon humbly gave his soul to God on December 28, 1621.

Born August 21, 1567 at Château de Thorens, Savoy to a well-placed Savoyard family, the eldest of twelve children born to François de Boisy and Françoise de Sionnz. His parents intended that Francis become a lawyer, enter politics, and carry on the family line and power. He studied at La Roche and Annecy in France, taught by Jesuits. Attended the Collège de Clermont in Paris, France at age 12. In his early teens, Francis began to believe in pre-destination, and was so afraid that he was pre-emptily condemned to Hell that he became ill and eventually was confined to bed. However, in January 1587 at the Church of Saint Stephen, he overcame the crisis, decided that whatever God had in store for him was for the best, and dedicated his life to God.

Studied law and theology at the University of Padua, Italy, and earned a doctorate in both fields. He returned home, and found a position as Senate advocate. It was at this point that he received a message telling him to "Leave all and follow me." He took this as a call to the priesthood, a move his family fiercely opposed, and especially when he refused a marriage that had been arranged for him. However, he pursued a devoted prayer life, and his gentle ways won over the family.

Priest. In 1593 he was appointed provost of the diocese of Geneva, Switzerland, a stronghold of Calvinists. Preacher, writer and spiritual director in the district of Chablais. His simple, clear explanations of Catholic doctrine, and his gentle way with everyone, brought many back to the Roman Church. He even used sign language in order to bring the message to the deaf, leading to his patronage of deaf people.

Bishop of Geneva in 1602. He travelled and evangelized throughout the Duchy of Savoy, working with children whenever he could. Friend of Saint Vincent de Paul. He turned down a wealthy French bishopric to continue working where God had placed him. With Saint Jeanne de Chantal he helped found the Order of the Visitation. A prolific correspondent, many of his letters have survived.

He died on December 28, 1622 at Lyon, France of natural causes and was buried at the basilica of the Visitation, Annecy, France.