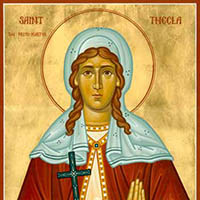 Roman martyrology: In Sicily, Italy, Saint Thecla, a virgin, who dedicated her life to the poor and works of mercy.

Born on the 3rd century in Lentini, Sicily, Italy. Noble virgin and daughter of Saint Isidore of Lentini; related to Saint Neofyta and Saint Neofytus.

She worked with the poor in Lentini and buried the bodies of the martyrs with loving reverence, until an unspecified disease left her paralyzed and bed-ridden for six years; she was healed by the prayers of three holy brothers (Saints Alphius, Philadelphus, and Cyrinus) who were immediately imprisoned.

When they were in prison for the faith, Thecla and her servant Justina, bribed the guards to let them visit, feed and minister to the brothers and other prisoners until they were each martyred, and then the two women gave them a Christian burial.
Tertullus, the governor, hearing of this, sent for her, but his sudden death saved her from injury. During the persecution, she concealed Agatho, Bishop of Lipari, in one of her farms; and when the persecution was over, she and Justina spent their fortunes in works of mercy.

She died on January 10, 264 in Lentini, Sicily, Italy of natural causes.